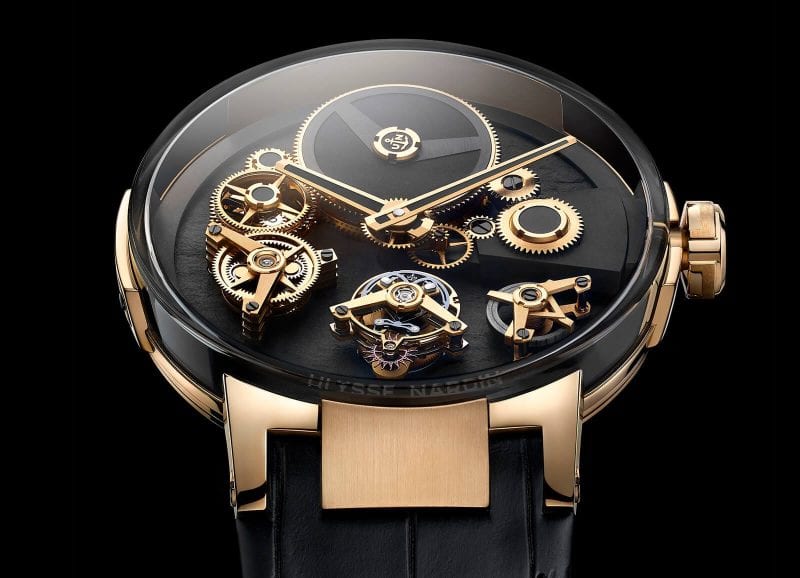 Ulysse Nardin‘s latest tourbillon is a creative and visually intriguing interpretation of the Executive Skeleton Tourbillon. It’s the watchmaker’s latest high complication and just as mental as you’d expect. Granted the case is a little less off-kilter than usual, but mechanically it’s something else entirely.

The standout feature, as you will no doubt have spotted, is the absence of a dial but this goes further than a simple open-worked design. Features are the dial’s tourbillon bridges and the 7-day power reserve indicator at four o’clock, which are shaped like boomerangs and look like they are floating in the air. So to do the other ‘skeletonized’ components, the hour and minute indicators and the gorgeous gear trains. Vibrating inside that turning tourbillon cage is Ulysse Nardin’s in-house Anchor Escapement, a mechanism that relies on the low friction and flexible properties of silicon blades.

Aesthetically, the Executive Tourbillon “Free Wheel” comes in two forms. The modern-sized 44mm dial for the 18ct rose gold version is in dark stone, carved from a slab of slate price is $96,000. The 18ct white gold version is built on a sleek black honeycomb grid it costs $99,000. Refreshingly, it is not even a limited edition. ulysse-nardin.com