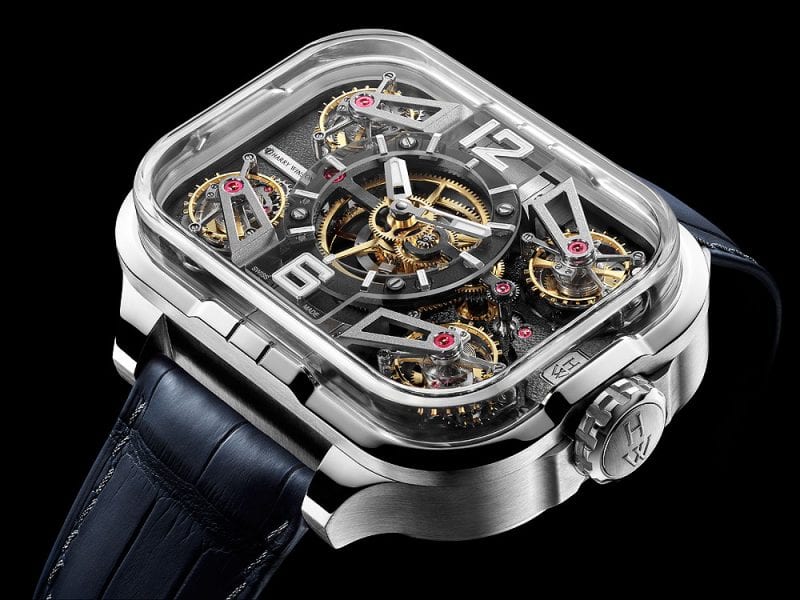 The Histoire de Tourbillon 10 is the final installment in the series; which is available in three case materials, 10 pieces in 18k white gold, 10 in 18k rose gold, and one unique piece in the brand’s proprietary Winstonium alloy — is the first series-produced wristwatch to include four tourbillon regulators. The tourbillon cages rotate once every 36 seconds with the balances oscillating at 21,600 vph/3 Hz.

One differentail connects the two tourbillon cages on the left side of the dial, the second does the same thing on the right side of the dial. The third differential, located in the center, averages the other two differentials. Along with the watch’s two pairs of fast-winding barrels, which are overlaid, mounted successively, and connected to the tourbillons, this system ensures evenly distributed energy and thus a more precise chronometry. It offers a relatively short power reserve of 55 hours. As you would expect, the movement is stunningly decorated, with modern finishes, such as frosted main plate on the dial side, X-shaped bridges on the back, straight-brushed and sandblasted surfaces but also the classic decorations such as anglages or bevelled wheel spokes.

The 53.3 mm wide (x 39.1 mm tall) case is crafted in platinum or gold and features a box-like sapphire crystal. The dial of the Histoire de Tourbillon 10, which provides a large, clear window into this mechanical tableau, it’s cut from a single piece of sapphire and has a central hollow circle surrounded by a chapter ring with applied hour markers.  The arches on the top and bottom of hte case are designed to reflect the entrance way of the brand’s iconic Fifth Avenue salon.

Three editions of the Harry Winston Histoire de Tourbillon 10 will be available. Ten pieces will be made in 18k white gold, ten pieces in 18k rose gold and one unique piece in Winstonium, a specific platinum alloy. Discover Opulent Club on Apple News.