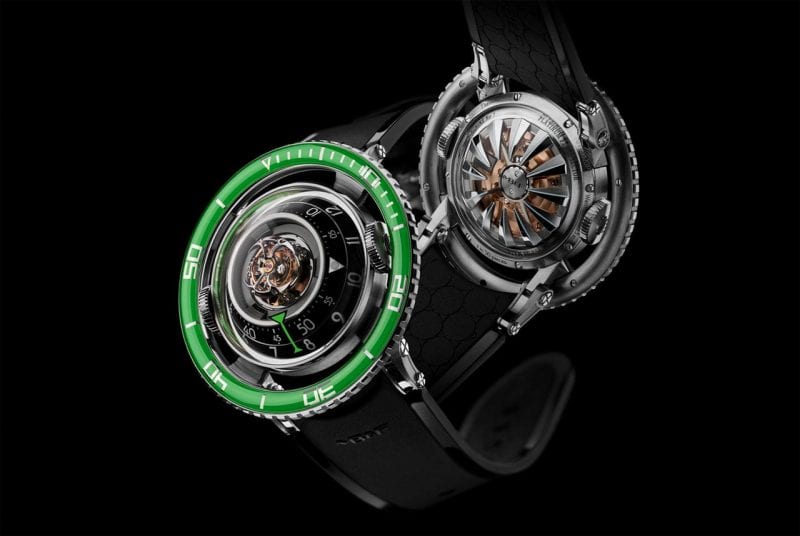 Joining the MB&F Horological Machine No. 7 Aquapod in titanium and the Aquapod in 18K 5N red gold released last year at the SIHH. MB&F is now launching a third variation in titanium with a green sapphire crystal bezel.

Inspired to the radially symmetric design of jellyfishes, available in a limited edition of 50 pieces in grade 5 titanium with green bezel, this new iteration of the HM7 is simply out of this world. The HM7 Aquapod Green has a concentric architecture with, from bottom to top, the winding rotor, mainspring barrel, hour and minute indications, and flying tourbillon, all of them arranged around the central axis. The HM7 Aquapod generates power from its tentacle-like automatic winding rotor.

At the very top of the movement, the wearer can enjoy the continually rotating flying tourbillon regulator. Three panels of AGT Ultra (Ambient Glow Technology) lume around the inside of the movement illuminate the tourbillon for maximum appreciation by night.

Unlike most other dive watches on the market, the MB&F HM7 Aquapod’s bezel isn’t attached to the case, but floats apart, as if it was unattached to the case. Beating at a frequency of 18,000 vibrations per hour (2.5 Hz) with a power reserve of 72 hours, the in-house developed 305-component HM7 Engine generates power from its tentacle-like automatic winding rotor crafted from a solid block of titanium with a platinum mass to ensure powerful and efficient winding. 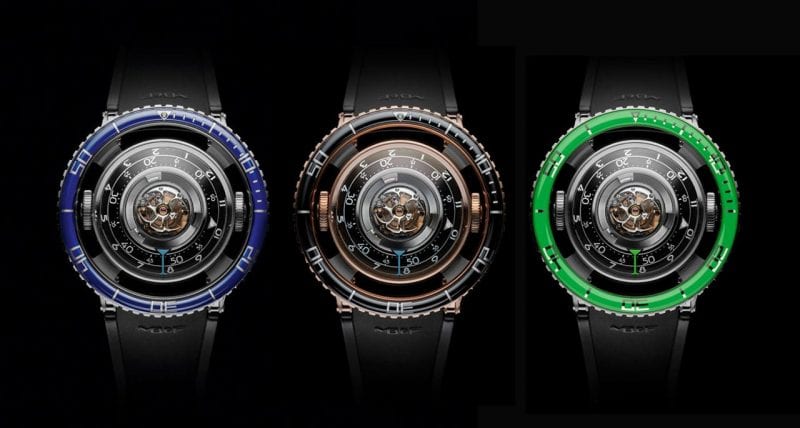