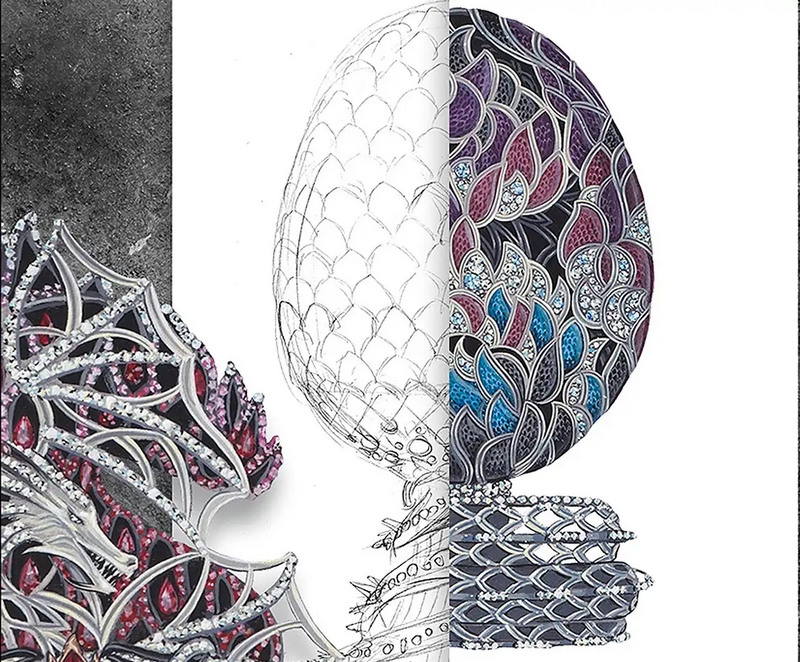 Jewelry makers at the House of Fabergé are hatching an exclusive $2.2 million gift for fans of the iconic HBO series “Game of Thrones objet d’art to celebrate the 10th anniversary of HBO’s fantasy series.

“Co-designed by our Designer, Liisa Tallgren and Michele Clapton, the Emmy and BAFTA winning costume designer from HBO’s Game of Thrones, this one-off work of art is history in the making and offers a unique opportunity for one individual to acquire a modern day heirloom for future generations.” – Fabergé

Fabergé’s lead designer Liisa Tallgren worked closely with Game of Thrones’ Costume Designer Michele Clapton to create an intricate and enchanting design which tells the tale of Daenerys Targaryen’s quest to take her place on the Iron Throne. The commemorative piece has only been unveiled in sketch form, with designs showing delicate engraving, moonstone gems and a pink, blue and purple palette.

Featuring purple, blue, red, silver scales with diamond accents, the egg’s exterior was designed to resemble “the textures of the dragons and their iconic eggs.”  The interior, in turn, features a ruby-encrusted surprise: a miniature crown representing the crown Daenerys would have worn atop the Iron Throne, with a dragon’s head and wings rising behind it.  The entire egg structure is fixed on a small diamond-decorated pedestal resembling a dragon’s tail.

The finished bespoke piece is set to be unveiled later this year. The House of Fabergé is world-renowned for crafting a series of 50 ornate Easter eggs for the Russian imperial family between 1885 and 1916. Discover Opulent Club on Apple News.