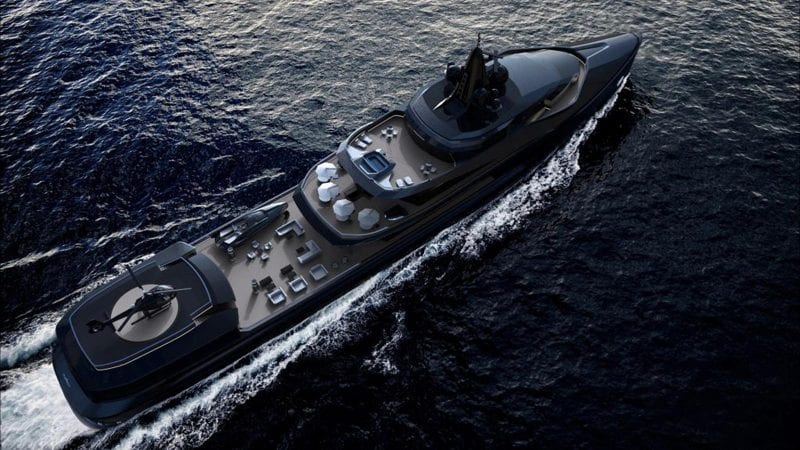 Dutch yard Oceanco has revealed a new 105 metre “high-tech go-anywhere” expedition yacht concept named Esquel.   Designed by Timur Bozca and Gina Brennan, Esquel is created for adventurous owners looking to cruise the remotest regions of our planet in the comfort and safety expected from an Oceanco superyacht in a sub-5,000 GT package.

“At the same time, she offers all the aesthetics, amenities, interior and exterior finishes and attention to engineering detail seen onboard all Oceancos,” says Dirk de Jong Commercial Director at Oceanco.

Esquel is equipped with a sophisticated diesel-electric propulsion framework that is engineered by Lateral to allow for a top speed of 16.5 knots and a cruising range of 7000 nautical miles at 13 knots, while deliver dependable green power no matter where the yacht finds itself.

Designed with a flexible layout to match various owners’ requirements, the overall theme is one of comfortable family living and exceptional views to the outside.  Interior decor has been handed to designer Gina Brennan, who previously worked on the interior designs for Soho House and a number of other private members’ clubs. She described Esquel’s decor as “cool and casual.”  A grand panoramic portal in the master suite will be the first sight that greets the owner each morning while a lounge and cosy fireplace become the perfect way to wind down after a day in the wild.

Key interior spaces include a main deck saloon equipped with a large dining table and groups of sofas and chairs gathered around a central fireplace. The yacht will also include provision for the home-schooling of children, with plentiful accommodation for nannies and tutors, as well as labs, vehicles and tools for “shore exploration.”