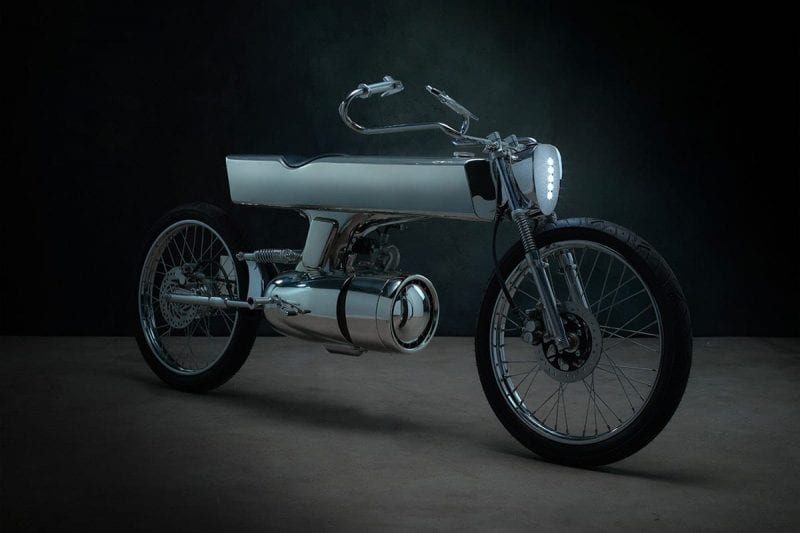 Bandit9‘s new L-Concept motorcycle is a two-wheeled masterpiece that pays tribute to sci-fi films. The road-ready bike consists of a sleek stainless steel unibody tank along with a suspended engine that mimics the stylings of the USS Enterprise.

The L-Concept is built with a unibody tank, while the chrome plated stainless steel suspended engine is modelled after the reactor on the USS Enterprise in Star Trek. The engine alone takes over 60 hours to make by hand.

The handcrafted build comes with sculpted grips along with levers chiseled from one piece of solid aluminium and an accompanying Italian calf leather teardrop saddle. LEDs also provides the necessary signals for travelling the road and making you feel like you’re piloting a speeder. The tail section supports the bike’s square taillight, which consists of 45 micro LEDs covered by what Bandit9 calls a “Pantheon Rear Grill”. The tail light has integrated turn signals, while the indicators up front are two small units wrapped around each fork residing on both sides of the cowl.

The L-Concept might look like a piece in the museum, but it is in fact made for the road. According to Bandit9, the L Concept has a top speed of 110 km/h. Powered by a 125 cc engine paired with 4-speed manual transmission. Bandit9 states on the website that 4 out of 9 L-Concept examples are still up for grabs at US$ 10,950 each.