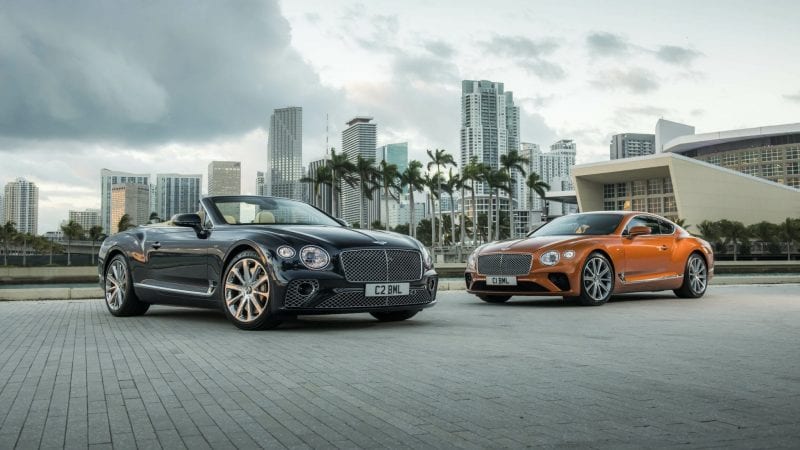 British luxury maker Bentley announced its redesigned Continental GT and GT Convertible will soon be available with a twin-turbo V-8 rather in addition to the brand’s quintessential W-12 engine. The U.S., in fact, will debut the engine in the new car, as the rest of the world will have to wait until the first quarter of 2020 to get their mitts on the twin-turbo eight, or any new Conti for that matter.

Both models are fitted a 4.0-liter twin-turbo V8 engine that makes 542 horsepower and 568 pound-feet of torque. A 0-60 mph time of 3.9 seconds is claimed by Bentley, with a top speed of 198 mph.  Bentley says both are capable of storming all the way up to 198 mph—given you have a continental amount of road to safely reach that speed.

The Continental GT V8 and GT V8 Convertible feature 20-inch, 10-spoke painted alloys wheels, subtle V8 badging and a sublime, handcrafted interior. The standard version boasts an array of improved technology, such as the LED Matrix headlights, Bentley’s interior rotating display, 20-way adjustable leather seats, and even a 650W 10-speaker Bentley audio system. With the convertible, its automatically folding roof can pop up or shrink away in 19 seconds at speeds up to 30 mph, you also get an improved neckwarmer — keeping you warm for the sold summer nights.

Customer deliveries will commence in the US in Q3, with a following worldwide release in early 2020. Pricing has yet to be announced but is expected to land somewhere north of $200,000. Discover Opulent Club on Apple News.