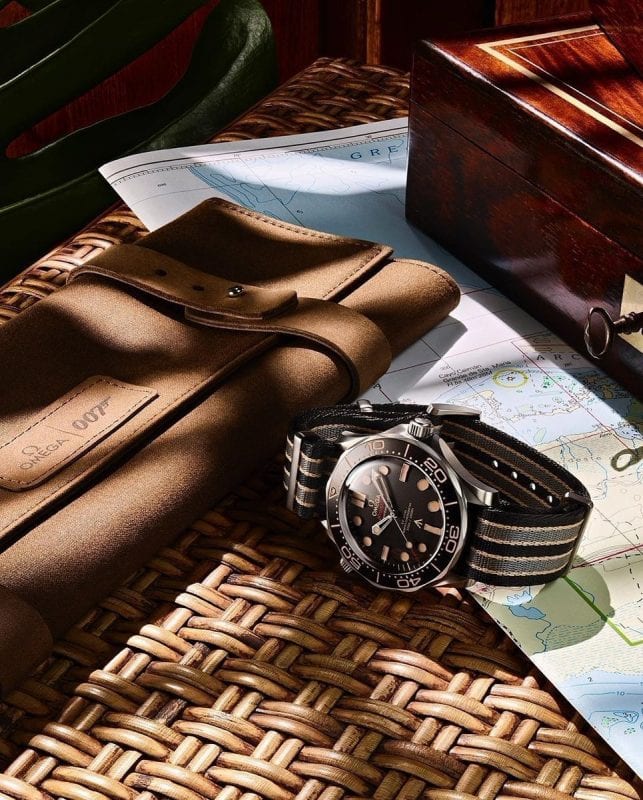 James Bond’s Omega Seamaster Watch From No Time to Die

To celebrate the upcoming release of the 25th James Bond film, No Time To Die, OMEGA has crafted a new Seamaster Diver 300M 007 Edition. Omega has worked closely on the development of Bond’s watch with Daniel Craig and the filmmakers, whose knowledge of the James Bond franchise has influenced this stunning final design.

Available in either a titanium mesh Milanese Strap or dark brown, grey, and beige Nato Strap with “007” engraved on the loop, the 42mm watch is constructed of Grade 2 Titanium and features a new special doming of sapphire-crystal glass. Although this material is strong and lightweight, OMEGA has used “tropical” brown aluminium for the dial and bezel ring to further decrease the weight. The vintage Super-LumiNova fills the diving scale, blackened hands and indexes.

On the caseback, you’ll find a series of numbers, which follow the format for genuine military-issue watches. “0552” is a naval code-number, with “923 7697” being the number for a divers’ watch. The letter “A” signifies a watch with a screw-in crown, while “007” is, of course, James Bond’s iconic agent number. Finally, the number “62” refers to the year of the very first James Bond film. A NAIAD LOCK caseback keeps all of the engravings in correct alignment. The timepiece is powered by an impressive movement the OMEGA Co-Axial Master Chronometer Calibre 8806.