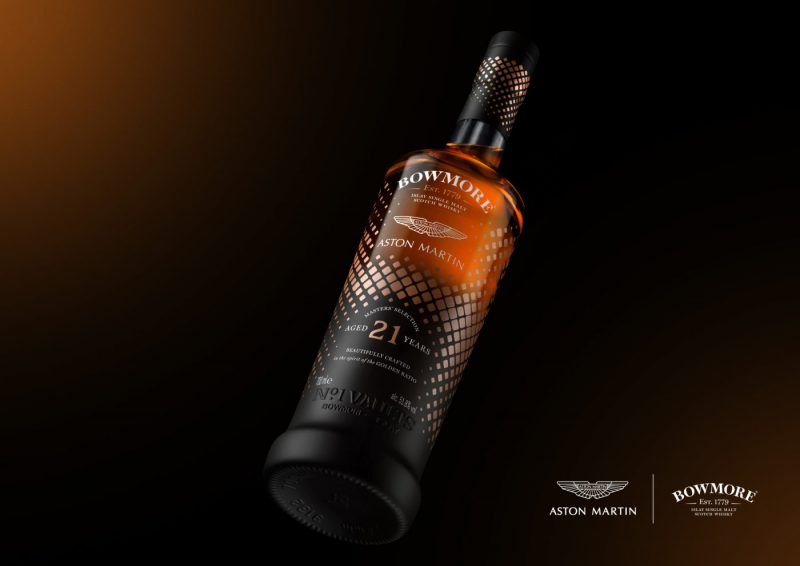 Bowmore Islay Single Malt Scotch Whisky has collaborated with Aston Martin to create a special whisky. The Aston Martin x Bowmore Masters’ Selection combines the mastery of Aston Martin Chief Creative Officer and Bowmore’s Master Whisky Blender. The concept of the ‘Golden Ratio’ – the mathematical ratio found in nature that creates aesthetically pleasing compositions sits at the heart of the design of every Aston Martin. For Bowmore, proportions define character and shape flavour combinations; from cask selection and age to blending.

The Golden Ratio is now being adopted for the first time by Bowmore with its new 21-year old single malt whiskey collaboration. For this single malt, a powerful and complex yet sweet warming, the creators seem, on the face, to have created absolute contrast but in reality, they have captured perfect balance and proportion. That component makes up 61.8 percent of the Scotch, with the remaining parts, including Bowmore matured for more than 35 years, split evenly according to the Golden Ratio. The distillery says the result features hints of sherry, coffee, honey and pepper.

Priced at $300, Bowmore Masters’ Selection is available in key global markets including UK, Germany, Canada, USA and China. It’s the fifth release the two brands have collaborated on, a list that includes a $66,000 bottle of Black Bowmore DB5 1964 and a whisky-themed DBX SUV. Discover Opulent Club on Apple News.