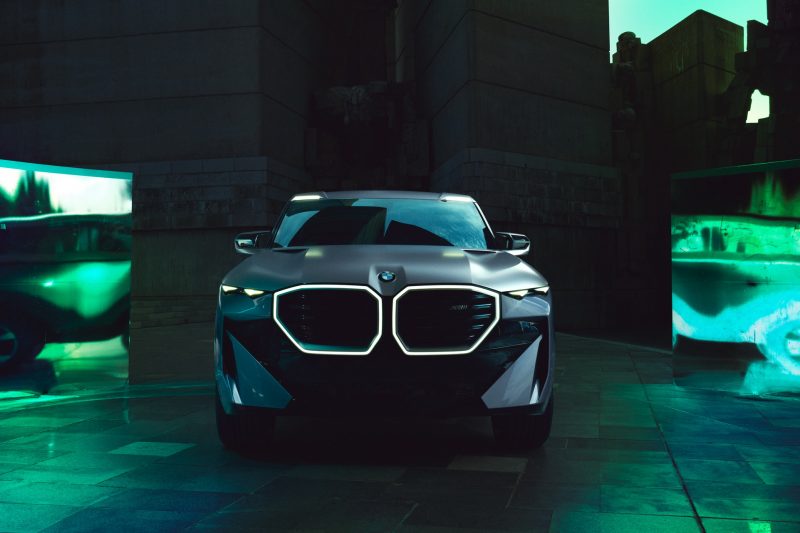 BMW has unveiled a new concept car, the BMW Concept XM. BMW’s first standalone SUV M model ever and the second standalone M vehicle since the M1 supercar of the late 1970s, and the car is a plug-in hybrid with a V8 engine and a high-performance electric motor.

BMW Concept XM  comes with an 550Kkw or 750 horsepower and it features 1,000 Nm or 737 lb-ft of torque, this set to make the upcoming production XM the most powerful Bimmer to date. The bold exterior styling of the Concept XM reflects the car’s exceptional performance attributes: dynamism, agility and precision. The company said the unusual front-end design, with two large nostril-shaped openings, shows off a new direction for its future luxury vehicles that includes an illuminated version of its black kidney grille.

The boldly sculpted bonnet extends the contours of the kidney grille back in the form of two power domes. A pair of air intakes in the bonnet mimic the appearance of the LED searchlights in the roof and add extra dynamic flair. Framing the statuesque body at its lower edge are the clean-cut black surfaces of the front apron. Triangular body-colored blades at the outer edges accentuate the vertical air intakes while emphasising the sporty and robust stance of the BMW Concept XM.

Inside, the XM blends styling details from other BMW concept and production cars, but with a focus on traditional luxury materials. The shift lever, door pulls, and iDrive system are the only major carryover items inside the XM, the rest is unique. Even the steering wheel is mostly unique to the XM. You get textured woven surfaces made from carbon fiber and cooper thread, plus lashings of rich brown leather mixed with turquoise velvet upholstery. Glance upwards, and you’re treated to the coolest headliner we’ve seen since AMC paired up with Pierre Cardin to stripe the roof of a Javelin. XM center console design is also entirely unique. It features three slanted openings; the outside two are vents, while the center one is a screen. Controls for the climate control seem to be metal and are placed underneath the vents.

The driver’s view forward, meanwhile, is dominated by BMW’s curved screen infotainment-gauge cluster hardware running the latest version of iDrive, but it’s interesting to note that that iDrive rotary controller is still in play.

The series production version of the vehicle, the BMW XM will start production by the end of 2022.  Discover Opulent Club on Apple News.