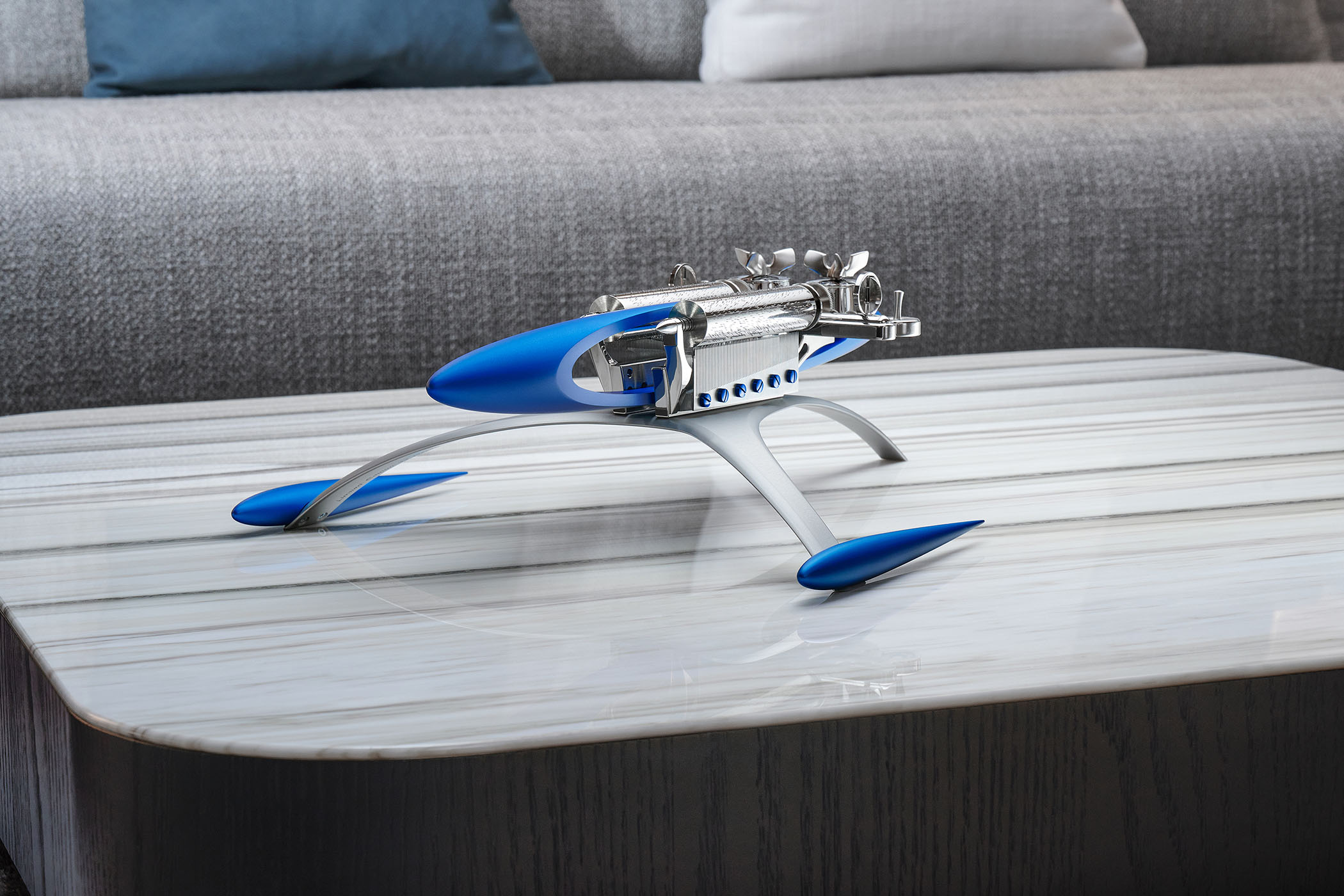 There is no shortage of imagination at MB&F, as the brand’s Co-Creations lab attests. In 2013, MB&F teamed with REUGE, the world leader of musical automatons, to create MusicMachine 1 the first music box that featured all the traditional of a high-end music box, but was configured in an unconventional way.  For the MusicMachine 1 Reloaded edition, Max Büsser had design graduate Max Maertens work on a more streamlined, aerodynamic version of the spaceship-cum-music box.

With its dual propellers and twin silver cylinders mounted on sleek outrigger landing gear, MusicMachine 1 Reloaded resembles a spaceship.  These subtle changes helped achieve Maertens’ intended design goal of a single, fused, streamlined shape with added aerodynamics. The MusicMachine looks to be flying through hyperspace even while standing still.

“The entire piece,” says Maertens, “ is in a kind of flow. This is especially visible in the wings, which now look as if they are in a wind tunnel with invisible airflow around them.”

Like a watch, the energy used to power the music box is derived from coiled springs and transferred by gear trains; the unwinding speed is carefully regulated by fan regulators like those found in traditional minute repeater watches.  This puts in motion two cylinders, which contain the “scores” of the melodies, materialized by 1,400 precision-placed pins. When the cylinders rotate, the pins pluck the teeth of steel combs, each containing a bespoke selection of 72 hand-tuned notes. Each comb forms a unique pair with its corresponding cylinder.

The Reloaded’s six musical melodies remain unchanged from the first MusicMachine’s, each having been picked out by Max Büsser himself. Each of the cylinders on MusicMachine 1 Reloaded plays three tunes, all personally selected by Maximilian Büsser. The left cylinder plays the Star Wars theme, “Imperial March” from The Empire Strikes Back, and the theme from Star Trek. Back on earth, the right cylinder plays Pink Floyd’s “Another Brick in the Wall,” Deep Purple’s “Smoke on the Water,” and John Lennon’s “Imagine.”

The new version the entire body of the music box is made of anodised aluminium and available in blue, red or black editions limited to 33 pieces each, 33 pieces in blue, 33 pieces in red, and 33 in black. Discover Opulent Club on Apple News.