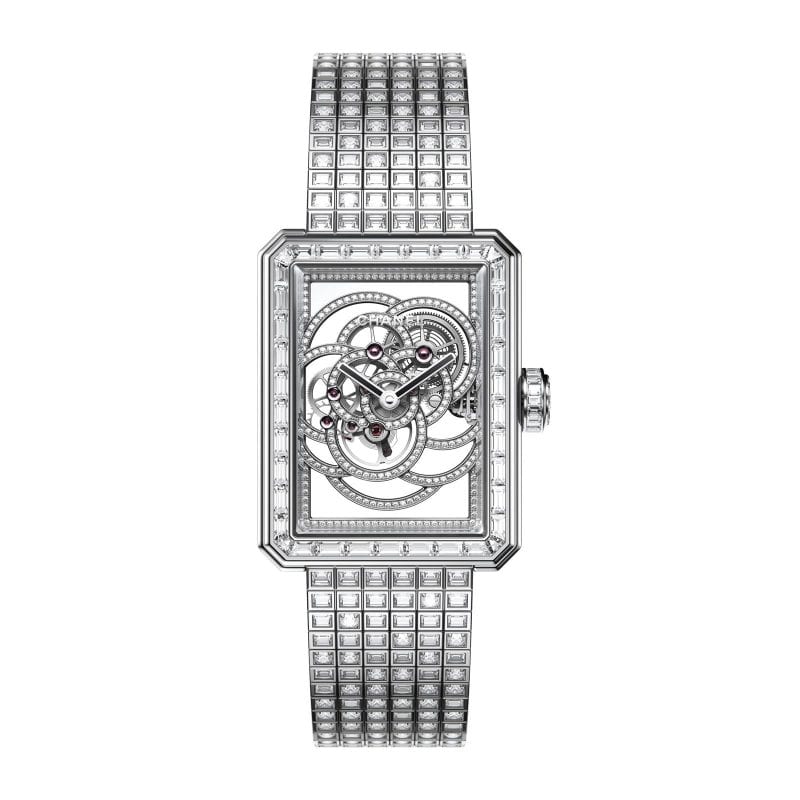 When it comes to Chanel’s watch making department, you really can’t predict what they are going to do next. Chanel’s Monsieur model, presented last year, was a double surprise: it was the brand’s first watch dedicated exclusively to gentlemen and it contained the brand’s first-ever in-house movement, the Calibre 1. One year later, as Chanel celebrates its 30th anniversary, we see the arrival of a second in-house calibre, this time dedicated exclusively to the house’s core customer: ladies.

This particular watch is the Calibre 2 – a skeletonised, movement in the shape of a camellia and Chanel’s second to be made in-house. The bridges coated in ADLC (amorphous diamond-like carbon), and optionally gem-set are inspired by the flower’s petals, while the mechanical guts of the movement emphasise this floral pattern creating an effect almost like a spirograph drawing. In the new Première Camellia Skeleton, this design is extended to the entire skeletonized movement, which takes the shape of a three-dimensional camellia flower. It’s a very impressive merging of Parisian aesthetics and watchmaking nous. 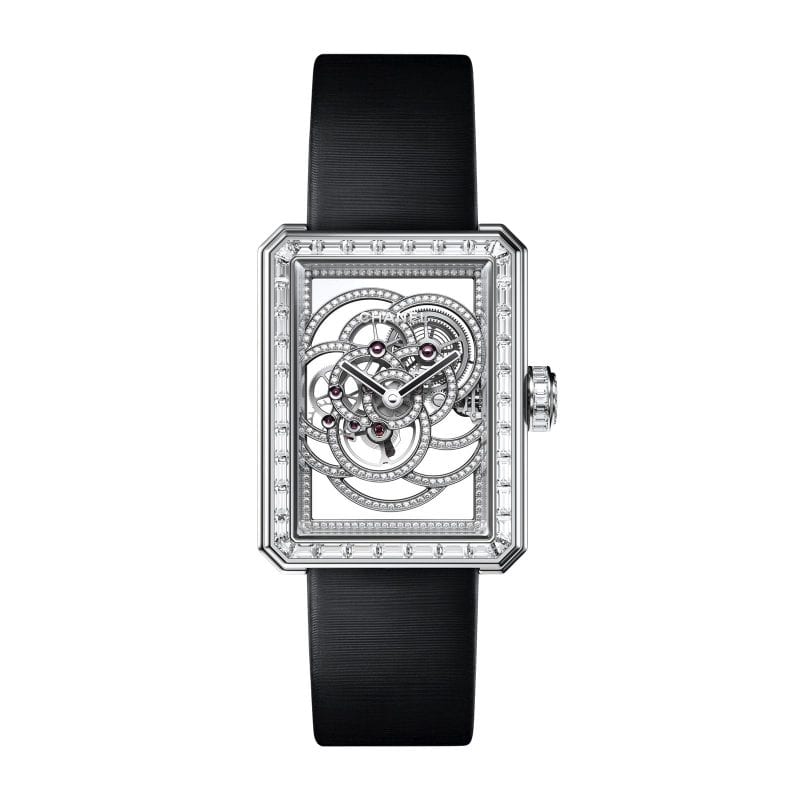 In order to do this, the Première case had to be modified to accommodate the new movement, which is built up in layer and has petals that are partially hidden in the case middle. The movement bridges are in gold, in order to allow for a breathtaking version set with 246 brilliant-cut diamonds. With the stones measuring just 0.5 – 0.7mm in diameter, setting them on to the fine curves of these bridges is a true test of the setter’s skill.
The Calibre 2 is manually wound, meaning that there is no movement from an oscillating mass to disturb the harmony of the watch. In keeping with the pared-down nature of this skeletonized timepiece, there is just one mainspring barrel, offering a total power reserve of 48 hours. It is stamped with Chanel’s Lion hallmark, which is only used for the brand’s high-end in-house movements.

According to the press release, the movement has been “conceived, developed, controlled and assembled by the Swiss manufacturer Châtelain”. Originally set up in 1936 as a polishing workshop in La Chaux-de-Fonds, Châtelain evolved into a one-stop-shop for machining, assembly and finishing over the next fifty years.

There are three version of the Premiere Camellia Skeleton, with increasing levels of diamond gem-setting. The first has an 18ct white-gold case with brilliant-cut diamonds set into the bezel, crown and on the hands; the next also has an 18ct white-gold case but, along with a bezel set with 42 baguettes and 52 brilliants and a crown boasting 16 baguettes and 11 brilliants, has a total of 246 brilliant-cut diamonds adorning the skeleton movement.

The final version, which is limited to 12 pieces (the other two are non-limited numbered editions), has all of the above as well as an 18ct white-gold bracelet set with an almost-blinding 282 baguettes and, if that wasn’t enough, a double-clasp buckle set with 30 brilliants. Prices range from 130,000 euros up to 260,000 euros.