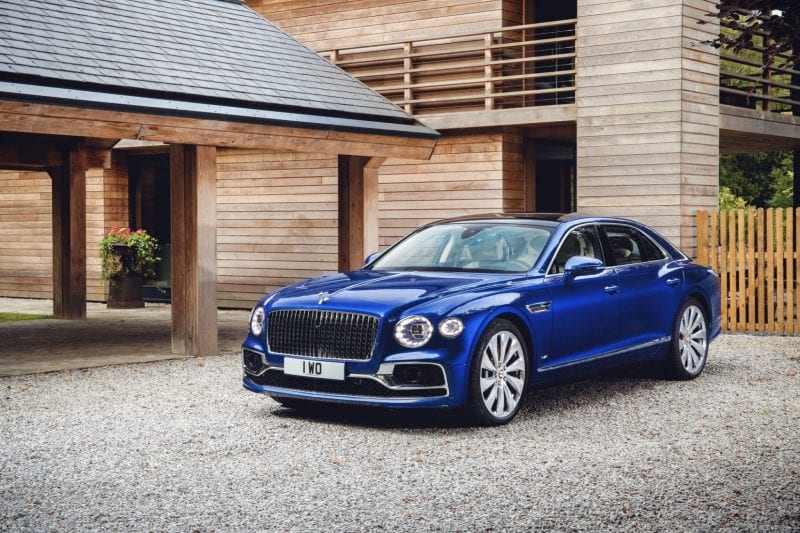 Bentley has revealed the Flying Spur First Edition, kicking off the third-generation production run. Announced at the Elton John AIDS Foundation Gala, where it will be auctioned for fund-raising charity on July 24.

The First Edition adds several features to one of the world’s fastest sedans. On the outside, it comes with a First Edition badge consisting of a Union Jack flag with the number 1 at the center and a new Flying B emblem that retracts into the hood when the car is locked.  The exclusive sedan sits on a set of 22-inch ally wheels that come courtesy of Bentley’s in-house personalization division.

In the interior, the Union Jack makes another proud appearance in the interior of the Flying Spur First Edition along with fancy lighting that can be configured to match your current mood.  First Edition badging is can be embroidered into the headrests, and Bentley’s Rotating Display — switchable between touchscreen display, veneered cover, or three analog dials is standard. Optional 3D wood veneer at the back complements the 3D effect leather that comes as standard in the rear as part of the Mulliner pack and a Naim for Bentley 2,200-watt audio system that comes loaded with 19-speakers and Active Bass Transducers.

Powered by a W12 engine, the new Flying Spur launches from zero to 60 mph in just 3.7 seconds. The sedan also benefits from all-wheel drive and all-wheel steering. Discover Opulent Club on Apple News.