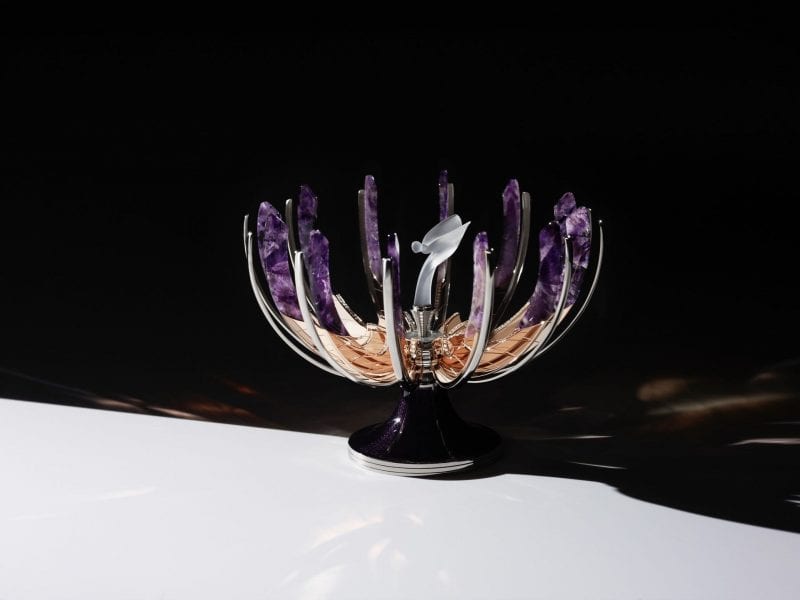 The creations of Peter Fabergé are amongst the most valuable objects in the world. He only created 50 Imperial Eggs before the Russian Revolution in 1917, and since then his legacy has been the subject of intrigue and oligarchs. Rolls-Royce and Fabergé have teamed up to create an all-new bejeweled egg that represents the heritage of both historic companies. It’s named the “Spirit of Ecstasy,” after the iconic hood ornament that has adorned Rolls-Royce cars since 1911. Rolls-Royce says the design of the egg was created by their designers Stefan Monro and Alex Innes. It was then rendered by Fabergé lead designer Liisa Tallgren and brought to life by a team of seven craftspeople. From concept to completion it took two years and seven craftspersons from Fabergé to create the egg, which stands at 160mm (6.3 inches) and weighs 400 grams (14.1 ounces). Hand-engraved, purple enamel guilloché base of 18K white gold and consists of rose gold arms that form the shell of the Egg. These are embellished with almost 10 carats of round white diamonds on the outside, while the inner curve of each segment is coated with purple enamel and crusted with natural amethyst weighing a total of 390 carats (78 g/2.7 oz).


“The ‘Spirit of Ecstasy’ Fabergé Egg was born from an intrinsic desire to further the realms of Bespoke personalization,” says Torsten Müller-Ötvös, Chief Executive Officer, Rolls-Royce Motor Cars. “Responding to the continuing demands of patrons in search of unique and cherished possessions, a designer at the House of Rolls-Royce sketched an Egg, igniting a fascination that will undoubtedly become one of the most collectable items of modern times.”

The Spirit of Ecstasy Fabergé Egg is unprecedented, and it is destined to be sought after by wealthy patrons of both brands.