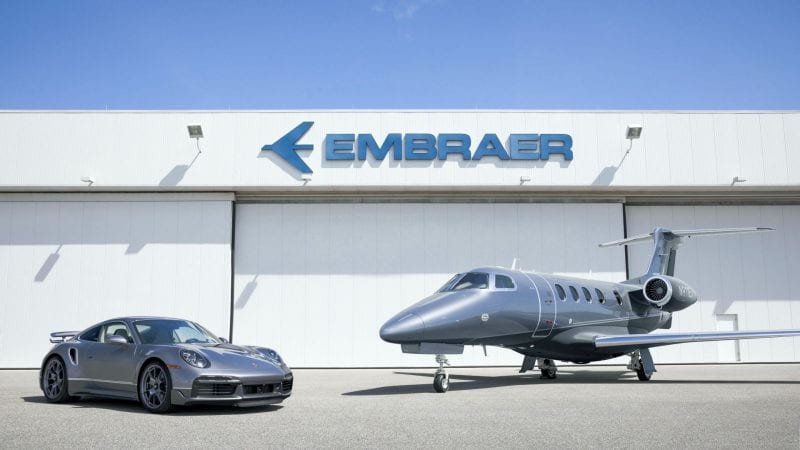 Porsche has teamed up with Embraer to create “Duet” – two most successful products from Embraer and Porsche. Customers who opt for a special edition Embraer Phenom 300E business jet can also buy a matching customised Porsche 911 Turbo S. Only 10 will be sold with a list price of $10,992,000 each that also includes a custom Porsche Design 1919 Globetimer UTC watch and luggage set and will take more than a year to complete.

It’s all about a “seamless transition” of road to sky, says Boris Apenbrink, the director of Porsche’s internal Exclusive Manufaktur department, during a video call about the collaboration. “The jet is meant to be piloted by the owner himself, and we also wanted the car that was the most fun to drive itself.”

“This is about making dreams come true for our customers,” he continues. And yes, it’s a bit of stunt marketing in the process.

The special edition pair has the same two-tone paintwork in Platinum Silver Metallic (gloss) and matt Jet Grey Metallic (satin gloss) with trim strips in Brilliant Chrome and Speed Blue. The paint finish has been produced in a complex manual process.

The Phenom 300 is one of Embraer’s best-selling private aircraft series. Its performance in the marketplace in addition to the skies earned it the title of “most-delivered light jet” in 2019 for the eighth consecutive year. The 911 Turbo S, not only the top-of-the-line version of Porsche’s most celebrated sports car, it’s also one of the quickest cars money can buy, claiming a 0-60-mph time of 2.6 seconds.

The collaboartion has even its own logo that takes its cue from aerodynamics and is made up of a stylised aeroplane wing from the Phenom 300E and the rear wing of the flagship 911 with the Sport Design package. The Duet logo is used on the exterior and in the interior of both products. The LED door projectors illuminate the “Duet” logo on the ground, which each customer has the option to customize in order to mark each conveyance as their own.

The individual registration of the jet is positioned on the underside of the rear wing and on the sides of the vehicle key. The door sill trims feature “No step” lettering illuminated in red. The dial on the stopwatch from the Sport Chrono package has a printed-on artificial horizon. Porsche says the cabin customized by its Manufaktur division takes inspiration from a jet cockpit. The seats are wrapped in both black and chalk leather and hand-sewn together in Speed Blue thread. The interior roof is covered in chalk Alcantara to match the seats along with the floor. Aside from all the rare elements, they also include Porsche’s Carbon interior package which fits the seats with high gloss carbon fiber along with the inner frame of the steering wheel.

Embraer’s Phenom 300E jet is the fastest and longest-ranged single-pilot jet, with a high-speed cruise of 464 knots and a five-occupant range of 3,724 km with NBAA IRF reserves. With the best climb and field performance in its class, the Phenom 300E costs less to operate and maintain than its peers. The aircraft is capable of flying at 13,716 metres (45,000 feet), powered by two Pratt & Whitney Canada PW535E1 engines with 3,478 pounds (15.47 kN) of thrust each.

The 10 limited-edition pairs of the Duet are now available for order, with deliveries scheduled to begin in 2021.  Discover Opulent Club on Apple News.