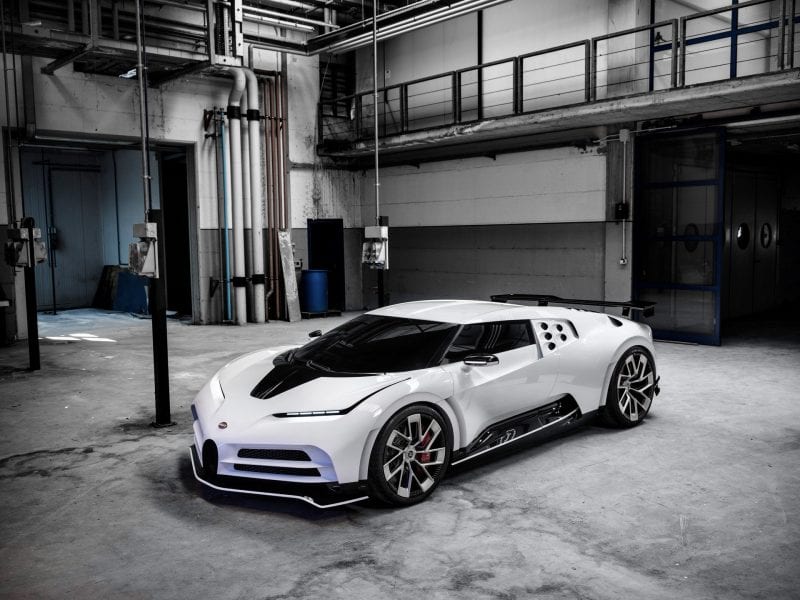 French automaker’s Bugatti has officially unveiled the new hypercar in Pebble Beach. The Centodieci which means 110 in Italian was designed with the classic car’s wide wedge shape in mind, but with a modern twist that could incorporate the cooling requirements of the 8.0-litre W16 engine that produces a staggering 1,578 hp (1,176 kW / 1,600 PS). This is 99 hp (74 kW / 100 PS) more than the Chiron. It can also hit 124mph in 6.1 seconds and 188mph in 13.1 seconds before going on to a top speed of 236mph.

The angular supercar, still dotted with the signature Bugatti design elements, tips its hat to the mid-engine EB110 supercar that debuted in 1991 when the company was owned by Romano Artioli. The company says that they wanted the Centodieci to be sportier and more extreme than the Bugatti Chiron and Divo hyper sports cars, yet elegant and timeless like the La Voiture Noire.

The front of the Centodieci drops very low. The horseshoe-shaped radiator at the front features the newly developed, deep-seated front spoiler and the three-section air intakes, while the rear end features a wide air outlet to dispel hot air from the engine bay. The Centodieci also has new, very narrow headlamps with integrated LED daytime running lights .

Stephan Winkelmann, president of Bugatti, said: “With the Centodieci, we pay homage to the EB110 super sports car which was built in the 1990s and is very much a part of our tradition-steeped history.

Production will be limited to ten and only two will be delivered to customers each year.  Despite that and an $8.9 (£7.3 / €8) million price tag, all ten units have already been sold. Discover Opulent Club on Apple News.