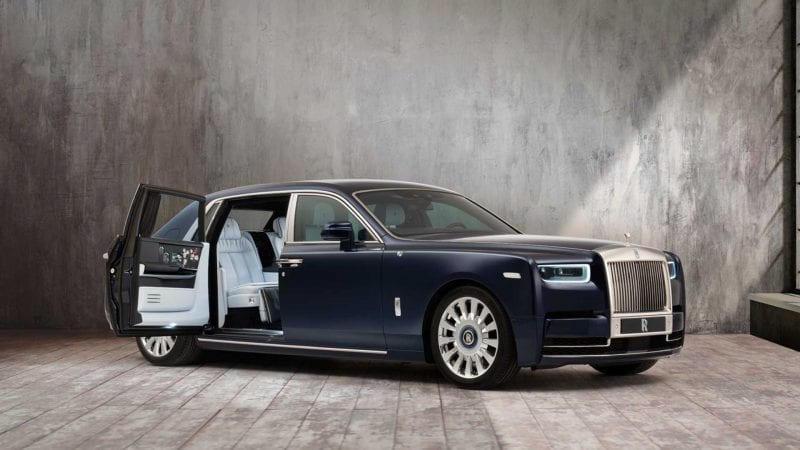 At the request of the patron, colour is introduced in the form of Peacock and Adonis Blue butterflies, imbuing movement to the elegant motif. The patron’s family also played a creative role; his wife designed the umbrellas whilst his daughter, Magnolia, defined the exterior hue of this Phantom. The patron commented, “I wanted to have flowers and roses everywhere. It became an amazing piece of art.”

The car’s design was inspired by a rose garden at the Home of Rolls-Royce in Goodwood, West Sussex, according to the automaker. The garden is also where the automaker’s one-of-a-kind flower Phantom Rose bred exclusively for Rolls-Royce by British Rose Breeder Philip Harkness of Harkness Roses, the Phantom Rose grows in the courtyard of the marque’s Global Centre of Luxury Manufacturing Excellence at Goodwood in West Sussex, England.

Inside, satin stitch Phantom Roses adorn the doors and the starlight headliner. The design shows the flowers in multiple stages of growth and is intended to portray a floral net spreading throughout the vehicle. Even the driver gets to enjoy the foliage, as the glass-encased dashboard has its own bouquet. The marque’s fabled starlight headliner illuminates the scene as the roses are interspersed with individually placed fibre-optic lights. The cabin scheme inverts the exterior colorway and uses Charles Blue leather Serenity Seating with Peacock Blue piping.

The Peacock Blue exterior of the Rose Phantom is punctuated with a Charles Blue twinned-coachline that intertwines organically like the stem of a rose, combining to introduce the rose motif, an indication of both the colours and the treatment within. The wheels echo the design and are embellished with a twinned pinstripe, also in Charles Blue.

If you want it, you’re out of luck. Al Saffar says it’s an amazing work of art that he’ll never sell. Discover Opulent Club on Apple News.