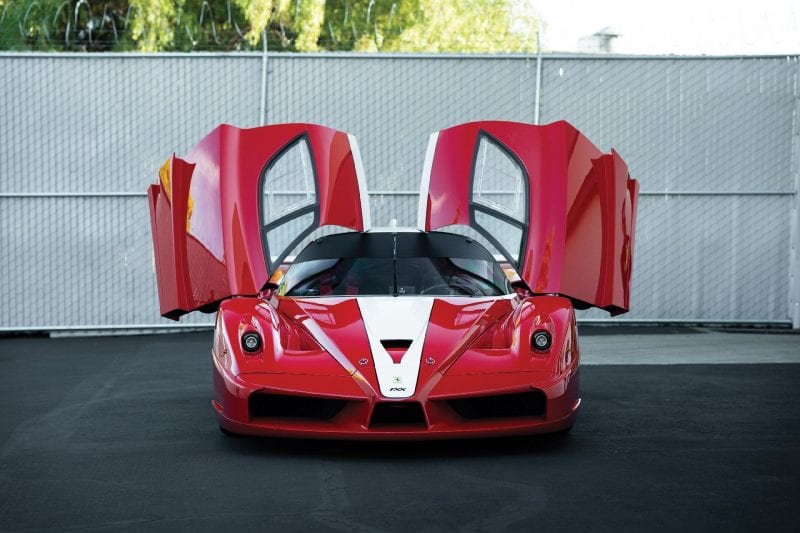 It’s a Ferrari collector’s dream: seven near-pristine Prancing Horses from the same owner, all for sale at one auction. Leading the Collection is the 2006 Ferrari FXX, part of the Ming Collection, the track-only development model is expected to go for between $2.85 million to $3.25 million at the RM Sotheby’s auction.

One of only 30 ever produced,  each powered by a high-strung 789-horsepower version of the Enzo’s 6.3-liter naturally aspirated V-12.  This track-only development model is basically still “in the wrapper,” having only been driven on the track once by its previous owner, according to the auction house.  It is based around the road-going Ferrari Enzo and was the first model in Ferrari’s hardcore XX series which now also includes various 599XX and LaFerrari-based FXX-K models.

Inside, there are a pair of racing bucket seats, loads of carbon fiber, a digital gauge cluster, and a steering wheel wrapped in alcantara.

RM Sotheby’s says this is the first FXX to be offered to the public in several years. The remaining five cars in the Collection (1984 Ferrari 512 BBi, 1985 Ferrari 308 GTSi, 2007 Ferrari F430 Spider F1, 1997 Ferrari 355 Spider) are finished in classic Rosso Corsa. Discover Opulent Club on Apple News.