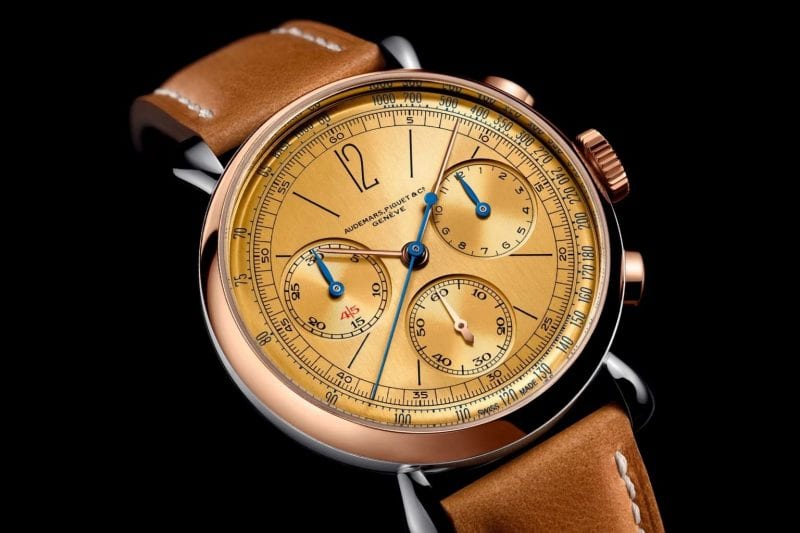 The most dominant trend in the watch industry continues to be vintage revivals. Audemars Piguet rarely looks to the past when it comes to its watches, or at least when to comes to the design of its watches. But this is about to change. Drawing inspiration from a legendary chronograph from the 1940s, the [Re]master01 is the first in a brand new line from Audemars Piguet.

But this isn’t just another re-issue of a timepiece from the brand’s rich archives, but instead is being touted as a “contemporary remastering”. Looking very much like the ref. 1533, the [Re]master01 recreates all of the key elements of the original. Characterised by large, teardrop lugs, the case is steel with its bezel, crown, and pushers in 18k pink gold. To adapt to the modern mechanics and modern tastes, the case now measures 40mm.

The 3 hands for the chronograph are blued steel, like the original. There is no date aperture. In a departure from the original, the dial is a yellow gold colour instead of rose gold and the sub-dials are placed differently because of the modern movement. The chronograph has a tricompax layout, with a 12-hour counter at 3 o’ clock and a running seconds subdial at 6 o’clock. The 30-minute counter at 9 o’clock has a 4/5 indication above the 15 minute mark, just as in the original. The cal. 4409 inside is an in-house movement from the same family of chronograph calibres first found in last year’s Code 11.59 chronograph. Equipped with the usual column wheel and vertical clutch common in modern, high-end chronographs, it’s a large, 32 mm movement with a longish, 70-hour power reserve.

The Audemars Piguet [Re]master01 Selfwinding Chronograph will be limited to 500 pieces and priced at $50,000, which makes it quite a bit more expensive than the Code 11.59 chronograph in pink gold. Discover Opulent Club on Apple News.