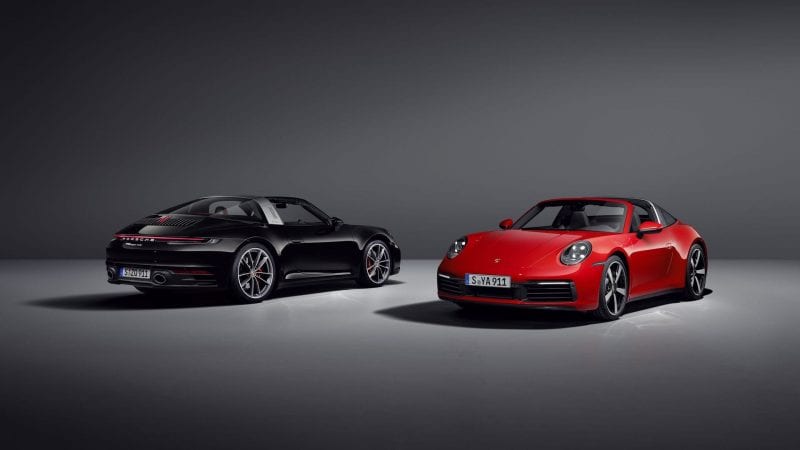 The 2021 Porsche 911 Targa 4 and 911 Targa 4S models have been unveiled by the German carmaker. The more powerful 4S model will be available with a seven-speed manual transmission. Both cars feature fully automatic roof system with a characteristic Targa bar, a retractable roof section above the front seats and a wraparound rear window. The roof can be automatically opened and closed in just 19 seconds.

And the number 4 is in the name, meaning they both have standard all-wheel-drive and Porsche Traction Management. The PDK dual-clutch transmission is also standard on both models although a six-speed manual is available on the Targa 4S at no extra cost, which includes the Sport Chrono package. Just like the 379 hp 911 Carrera models, the 911 Targa 4 comes standard with 235/40 ZR tires on 19-inch alloy wheels in front and 295/35 ZR tires on 20-inch wheels in the rear. The 4S model is fitted as standard with 245/35 ZR tires on 20-inch front wheels and 305/30 ZR tires on 21-inch rears.

A ceramic composite brake upgrade can also be optioned for both cars. The rear spoiler raises and lowers depending on the driving speed and mode, as is the case with other Porsche 911 models. The Porsche 911 Targa 4 and Targa 4S come equipped with adaptive cruise control. Porsche’s ‘InnoDrive’ adaptive cruise control system features for the first time in a 911 model.