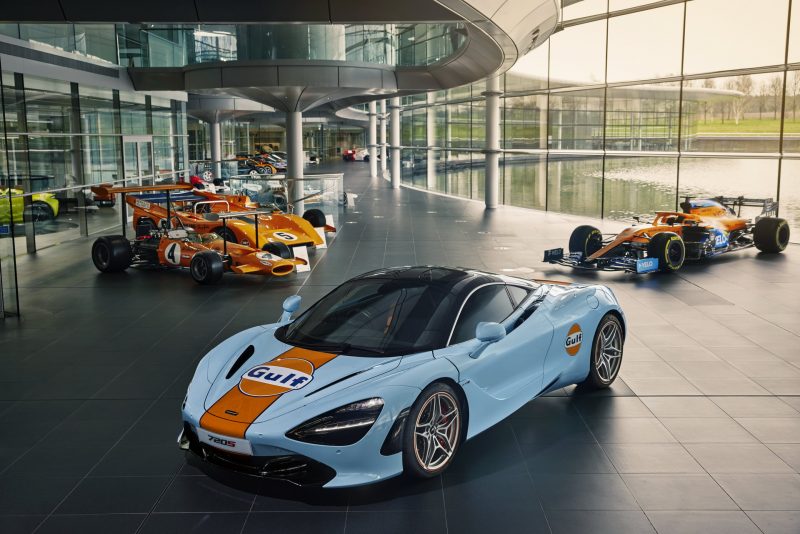 McLaren and Gulf are now celebrating their partnership with a bespoke 720S dressed in Gulf’s iconic racing colors. The project is part of the renewed relationship which was made public last summer between McLaren and Gulf as partners and as an official strategy in demonstrating the customization possibilities available for McLaren supercars.

McLaren first partnered with Gulf Pil in both Formula 1 and Can-Am from 1968 to 1973. The alliance was revived in the 1990s with the GTC Competition team’s legendary McLaren F1 GTRs, with victory in the 1996 BPR Global Endurance Series and the GT1 Class at the 24 hours of Le Mans in 1997. This year Gulf became the preferred lubricant supplier to McLaren Automotive, with all cars to be filled with Gulf oil and fuel optimized for high-performance engines.

To create the perfect finish for the vehicle, McLaren automotive partnered up with AkzoNobel’s pallet to create premium automotive paint hues.  The hand-painted livery took 20 days to complete. Only a limited number of customers will have the opportunity to have their McLaren supercar hand-painted in the Gulf livery.

In addition to the Racing Blue and Orange colors used on the Exterior body, the vehicle also features Gulf solid Orange on the brake calipers and matching blue. Orange stitching a matching interior with the ‘Gulf’ logos painted on the sills and embroidered on the headrests. McLaren steering wheel with a centre band in Gulf solid Orange and Blue to match the exterior carbon fibre spokes.