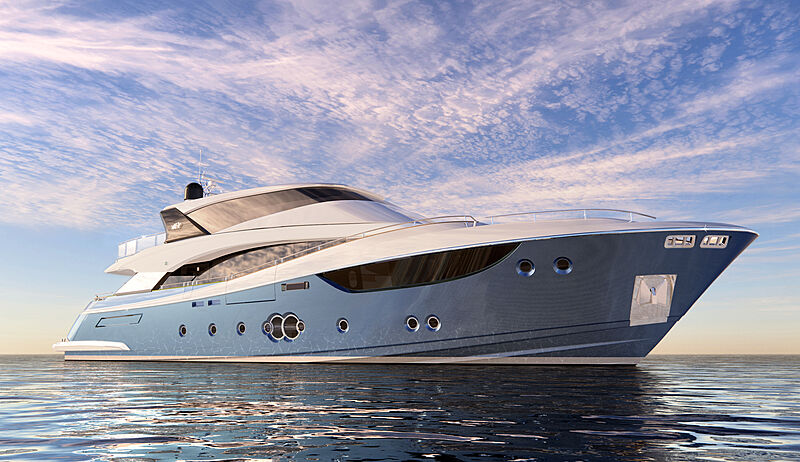 Italian shipyard Monte Carlo Yachts presents a Skylounge version of its flagship, the 32m MCY 105.  The 32 metre MCY 105 Skylounge will feature an enclosed upper deck as opposed to an open flybridge at the request of its owner. Purchased by an Asian owner and is set for delivery by the summer of 2022.

Monte Carlo Yachts is collaborating with its long lasting partners, Carlo Nuvolari and Dan Lenard, who boast an extensive expertise in designing mega yachts. The yacht has impressive volumes, with wide full-beam zones on both the main and upper deck, as well as a spacious owners cabin. All other accommodations are located on the lower deck.

The enclosed flybridge spans 43 sqm and is home to both an upper deck lounge and dining area with 360-degree views and a glass ceiling. However, the area can be customised to suit the needs of each owner with “unmatched levels of freedom”, says designers Carlo Nuvolari and Dan Lenard.

The upper deck living area incorporates the sole, fully equipped, helm station, which offers a 360° sight of the seascape as well as a superlative view of the sky through the transparent ceiling.  However, the area can be customised to suit the needs of each owner with “unmatched levels of freedom”, says designers Carlo Nuvolari and Dan Lenard.

The MCY 105 is the largest superyacht in Monte Carlo Yachts’ fleet and is powered by MTU engines delivering a top speed of 27 knots. Discover Opulent Club on Apple News.