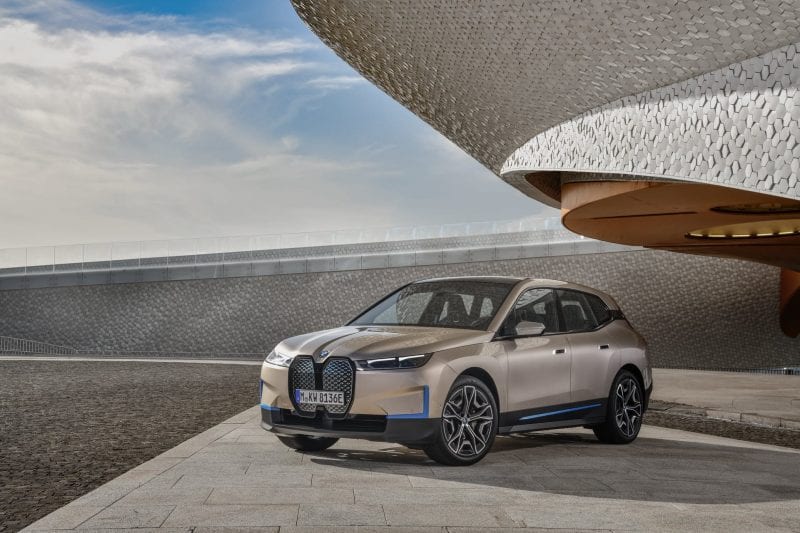 BMW has revealed its first all-electric SUV, with the iNEXT concept becoming the new BMW iX. It featured a unique shape and bold styling designed specifically for an EV platform.  Packing the latest innovations in the fields of electrification, automated driving and connectivity, the BMW iX will also act as the brand’s technology flagship.

The iX is constructed using the manufacturer’s latest Carbon Cage structure, pairing carbon fiber reinforced plastic with an aluminum spaceframe for high levels of torsional rigidity and weight reduction. On the outside, the BMW iX is said to re-imagine the powerful proportions of a large BMW SAV. The electric SUV is comparable to a BMW X5 in length and width, but has almost the same height as the X6 thanks to its flowing roofline.

The BMW iX has two electric motors for all-wheel drive, and we’re told to expect around 500 horsepower from the SUV and have a zero-to-62-mph time of under five seconds.  New charging technology enables the iX to charge at up to 200 kW, allowing a 10-80% charge to be completed in under 40 minutes, while fast charging enables 75 miles of range after 10 mins of charging. An 11-kW home charger can fully charge the battery in around 11 hours.

BMW is hooking up with EVgo in the US for its charging network, with updates to the BMW app showing things like real-time charger status, and allow them to start and monitor charging sessions.

The interior is still concept-worthy, the showpiece is the floating curved display that features two embedded screens.  A central 14.9-inch curved touchscreen display the primary user interface; this joins seamlessly to the 12.3-inch digital instrument screen. The center console is crafted to look like an upscale piece of furniture and features a rocker switch for gear selection, a big dial for the next-generation BMW Operating System, and a volume selector made of crystal.  The iX will also offer a head-up display to project data onto the inside of the screen plus the option of a 1615 Watt ‘4D’ Bowers & Wilkins audio system incorporating bass-enhancing ‘shakers’ in the front seat, similar to the system Mercedes has just introduced in the new S-Class. Other expected features are wireless smartphone charging capability and an on-board Wi-Fi hotspot.

Five can be seated in the iX’s cabin on newly developed seats that BMW claims has a lounge-like ambiance. BMW will offer a large panoramic sunroof featuring electrochromic shading as an option—a trick feature found on only a few vehicles.

Pricing details are still a while away, and BMW has yet to confirm whether the iX will offer lower-power (and -range) versions.  Production of the iX begins in the second half of 2021. The crossover will reach U.S. dealers in the first half of 2022. Discover Opulent Club on Apple News.