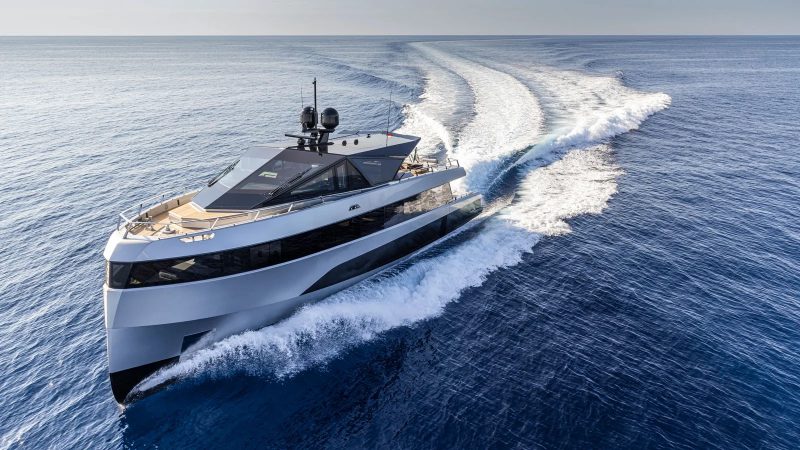 WHY200 Is a Ground-Breaking 89-Footer Superyacht

Wally has unveiled the first onboard interior shots of the first WHY200 motor yacht, which made her debut at this years Cannes Yachting Festival. The first unit of the new WHY range combines the comfort and space of a larger displacement yacht with the speed and performance of a semi-displacement.

Developed by Wally design team led by Luca Bassani, jointly with the Ferretti Group Engineering Department, working with Laurent Giles NA Ltd for naval architecture and Studio A. Vallicelli & C for interior design. One of the most standout features of the yacht is the wrap-around windows in her bow that illuminate the master suite and are unlike any other yacht in the fleet. Also on the upper deck, there is the extended, structural top with no supporting pillars.

The first unit will feature a four-cabin layout: the master cabin with two separate bathrooms on the main deck, a VIP, and two guest cabins on the lower deck. Connecting the three decks, the one-piece laminated carbon staircase as well as having a load-bearing function, is an extremely light element connecting the three decks and making the bulkheads superfluous in the open space living area, enhanced by a practical show-cooking kitchen. The walkways of the two living halls and the lower deck corridor are also teak. The restful and natural color palette of neutral and sandy tones creates a refined and timeless effect.

Thanks to the 5G wireless network connection with home automation control, guests are able to comfortably manage all the audio/video systems via mobile devices, both outside and inside the yacht. The first unit features a state-of-the-art 55 inch TV in the upper living room and a 5.1 Premium sound system on the main and upper decks, while a sophisticated Sonance sound system serves the outdoor areas.

The WHY200’s folding beach club bulwarks allow access to the sea on three sides, and also expand the living area to 32 m2, transforming it into a terrace over the water.  In addition, WHY200 boasts two garages with storage capacity capable of accommodating a 13ft/4.05m jet tender, wave runner, Seabob, paddleboard and all manner of water toys.

The first WHY200 is powered by four Volvo Penta D-13 IPS 1350 engines producing 1000 hp each. The yacht can cruise at any speed (23 knots top speed), maintaining a horizontal position without reducing the guests’ comfort on board. Discover Opulent Club on Apple News.