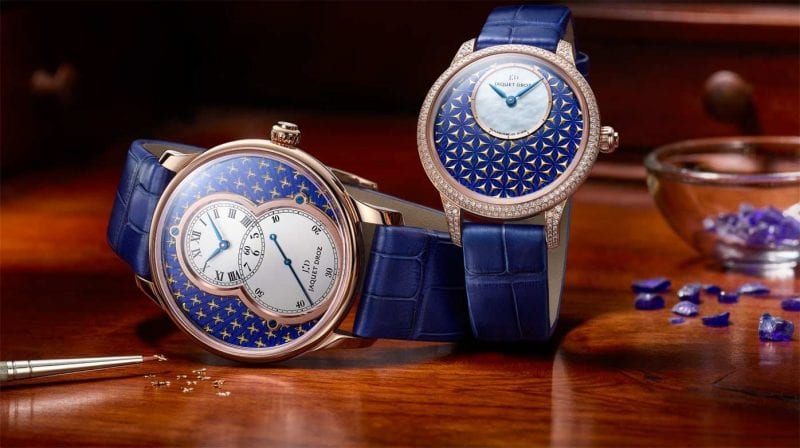 The craft of paillonné enameling is as rare today as it was 300 years ago and is practically a lost art. Jaquet Droz revives the ancient decorative technique to showcase floral motifs in its two latest watchmaking masterpieces, these two legacies come together in an unparalleled way.

The “Fleur de Lys” Grande Seconde Paillonnée and the “Fleur de Vie” Petite Heure Minute Paillonnée. What sets these two red gold timepieces apart is the art of paillonné enameling, an age-old decorative technique. The concept is based on another decorative art special to Jaquet Droz, the one used in the Grand Feu enamel dials. First, guilloché work is done on a gold dial. It is then covered in translucent colored enamel that lets the guilloché patterns shine through. Next, several layers of enamel are applied, each one individually fired in the oven. Then comes the phase that demands the dexterity of Jaquet Droz artisans because every new layer of enamel and firing can introduce cracks or flaws, which would mean starting from scratch. At this stage, the piece still shows slight variations in color. It also depends on each firing process.

It isn’t until the next phase that dainty motifs cut from a thin gold leaf, the paillons (or strips), are placed by hand one by one to create a figure. Once the design is done, the figures are also covered with another layer of enamel and fired in the same oven. This translucent coat will protect the paillonné motif for centuries to come, as if freezing it in place for all eternity.

Each of these new pieces is extremely limited to a Numerus Clausus series of eight. Discover Opulent Club on Apple News.