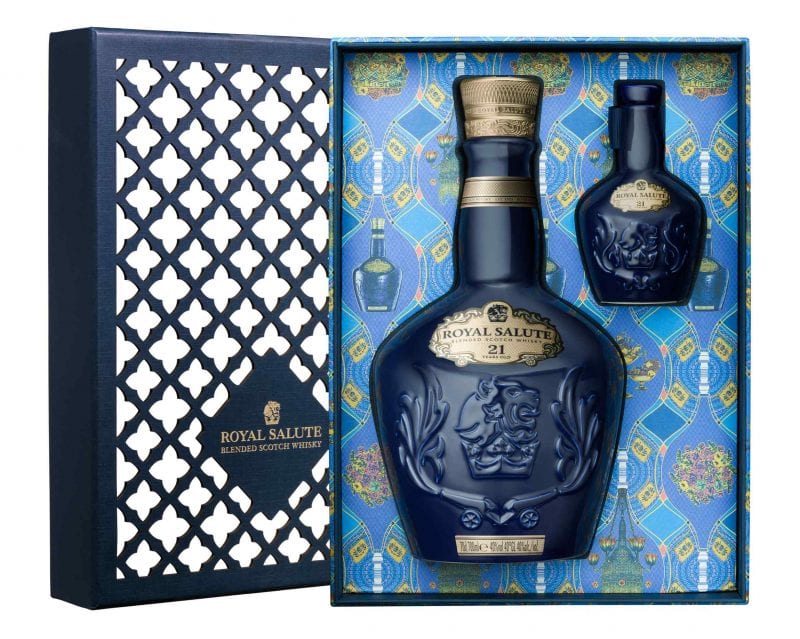 The ‘King of Whisky,’ Royal Salute, which was first created as a present for the Coronation of Queen Elizabeth in 1953. Royal Salute whisky is named after the 21-gun salute that honoured her investiture, and its first bottling was accordingly aged for 21 years.
The latest addition to its annual ‘Royal Celebrations at the Palace’ annual series, this limited edition set pays homage to the legendary Regent’s Banquet of 1817, a momentous event that was held in the Brighton Pavilion, and that boasted more than 120 exotic dishes.
Now a 21-Year-Old (£150 for 75cl), in a new limited edition special gift pack, blends aged malt and grain whiskies that have been matured at Royal Salute owner Chivas Brothers’ distilleries. 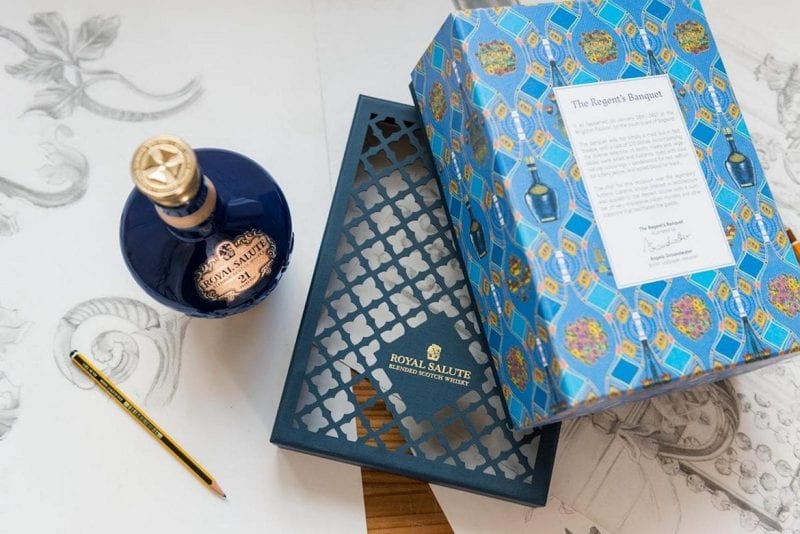 Featuring a beautiful intricate laser cut lid design which is inspired by the domes of the iconic building in East Sussex (it’s Moroccan Riad-esque in our opinion), the blue and gold motifs which line the interior of the gift pack are the brainchild of British wallpaper designer, Angela Groundwater. It comes with a dinky miniature 5cl version, while the gift pack features a blue and gold interior print that pays homage to The Regent’s Banquet, a gluttonous blowout hosted by the future George IV at Brighton Pavilion 200 years ago, in January 1817. Prepared by the world-famous Marie-Antoine Carême, it was as highly flavoured as the 21-Year-Old, featuring 127 dishes including jellies and custards dyed using sandalwood for red, saffron for yellow, boiled blood for black – as well as a 4ft-high Turkish marzipan mosque.

Amber in colour with a sweet citrus fragrance, it has a luxuriously smooth texture that cloaks hidden depths of toffee apples and notes of liquorice and ginger, while a hint of fresh pears dissolves into warm, spicy whiffs of autumn bonfire and a dry nutty finish.
There are 150,000 Royal Salute Regent Banquet Festive Gift Packs now available worldwide for a RRP of USD $130. This includes Asia and the Middle East where sales are expected to be particularly strong. It is also on sale at Harrods, priced at £150.