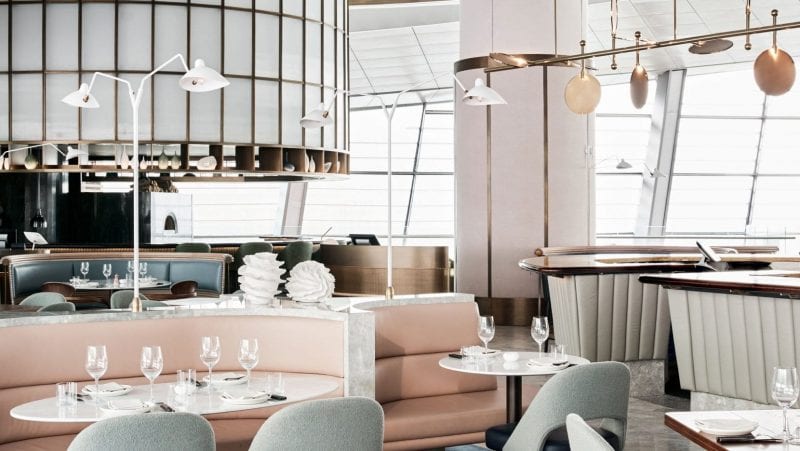 Award-winning chef Sean Connolly’s restaurant at Dubai Opera in Downtown Dubai is a true occasion place. The mainly dishes are steak and seafood in a venue with a mid-century aesthetic and an oceanic feeling. There is also an outdoor terrace where patrons can dine under the gleaming monumentality of the Burj Khalifa, making it one of the most coveted dining settings in downtown Dubai.

Designed by Sydney-based studio Alexander & Co in partnership with Tribe Studio, aquatic themes flow between the conjoined main restaurant, a fire bar where you can enjoy a range of pizzas from a wood fire oven as well as private dining and a chef’s table.

Occupying a curvilinear space at the top of the Dubai Opera’s “bow”, a glass and steel building that reminds us an Arabian sailing vessel, the restaurant’s décor draws inspiration from the building’s maritime form as well as Chef Connolly’s passion for oysters.

Additionally, the building’s asymmetry sparked a 20th century revival, noted in the custom Serge Mouille lighting and cult mid-century accents like walnut round tables, brass finishes and rose gold wired chairs, the restaurant is a pearl of modernist elegance.

“We were inspired significantly by the sculptural forms of Saarinen’s TWA airport and the tiled shells of our own Sydney Opera, also traditional Persian vaulting and tiled ceilings, along with a host of our most coveted 20th century chairs and light fittings,” expressed Jeremy Bull of Alexander & Co, further highlighting the restaurant’s unique blend of styles.