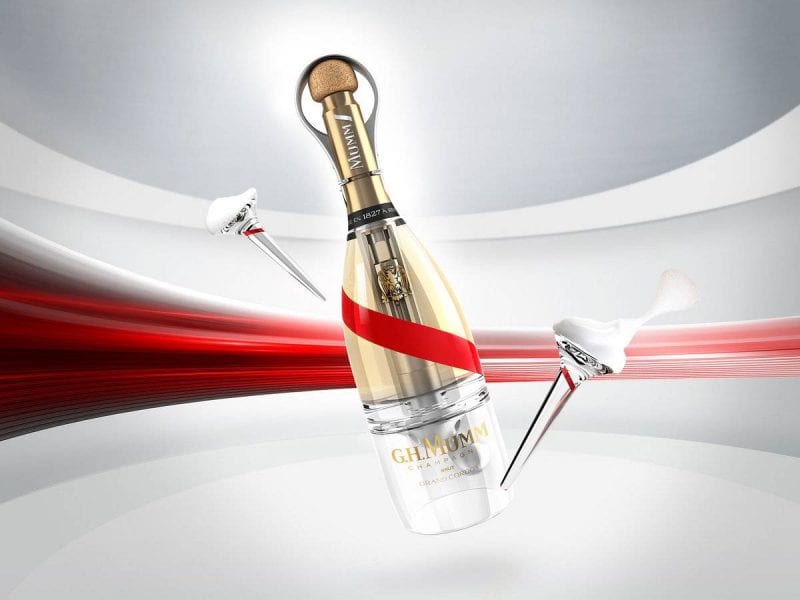 For the past three years Maison Mumm Champagne have been working with space travel design agency, Spade, to create a Champagne able to be enjoyed in zero gravity conditions. The new Mumm Grand Cordon Stellar employs a revolutionary new bottle and glass concept that uses the champagne’s own gas to expel the liquid into a ring-shaped frame, where it is concentrated into a droplet of bubbles.

Mumm claim that the futuristic glass bottle is capable of utilising the natural gas in Champagne to ‘expel the liquid into a ring-shaped frame, where it is concentrated into a droplet of bubbles’. ‘It can then be passed to someone and released into the air, where it floats until gathered up in a specially designed glass,’ said Mumm. The glasses have a tapering stem, no base and a small cup to catch the floating droplets.

Spade founder Octave de Gaulle explained, “For the last 40 years, space travel has been shaped by engineers rather than designers. Instead of seeing zero gravity as a problem to be solved, we look at it as a design possibility. The big design challenge for Mumm Grand Cordon Stellar was actually getting the liquid out of the bottle.”

Though the whole thing clearly has all the makings of a publicity stunt, Mumm suggests its new Grand Cordon Stellar “should soon be served to participants in the zero gravity flights organized by Air Zero G, while discussions are in progress to supply it to future space missions and commercial space flights.” And let’s be honest, if you have commercial space flight money, you’re likely used to drinking a lot of Champagne… so this is could be the innovation you’ve been waiting for.

Luckily, Mumm makes these Champagne toasts a lot easier to visualize with a video shot on a zero-gravity test flight.