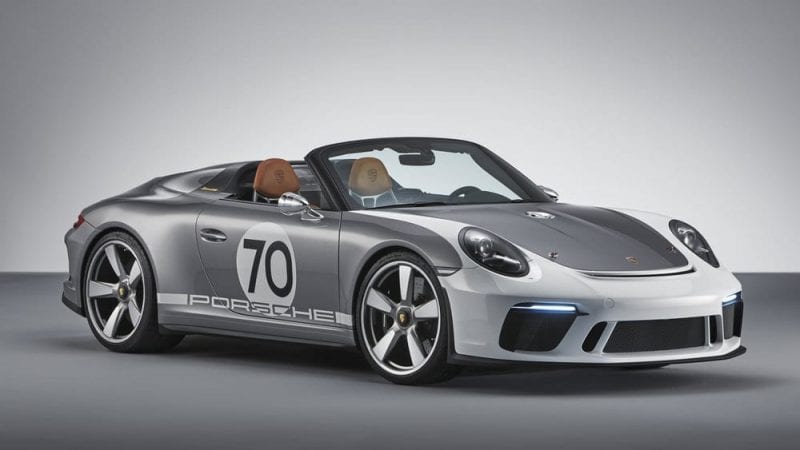 Porsche has rolled out the very cool 911 concept car. Called the Porsche 911 Speedster Concept, it’s basically a GT3 with its roof chopped off and with styling elements that pay tribute the open top version of the marque’s first car the legendary 356 Speedster “No.1” Roadster. Porsche says that car received its operating permit on June 8, 1948.

The 911 Speedster Concept celebrated its world premiere as part of the official ‘70 years Porsche sportscar’ anniversary celebrations in Zuffenhausen. According to Porsche: “The concept study offers a glimpse of a potential series-production version, although this model may not be presented until 2019. A decision on whether to move ahead will be made in the coming months.”


The Porsche 911 Speedster Concept’s development was handled by Porsche Motorsport in Weissach. The body of the concept comes from the Carrera 4 Cabriolet; although the windscreen is significantly shorter and steeply raked and the standard wings and hood has been ditched for carbon-fiber replacements. For further weight saving, the interior features carbon bucket seats, while the A/C unit and music system are missing.

The 911 Speedster concept using a lightweight tonneau cover instead of a convertible top. The full bucket seats are made of carbon, and the light brown Aniline leather covers in Cognac 356 are inspired by older Porsches. In terms of styling, the concept wears a two-tone paint scheme of GT Silver and White that harks back to old Porsche racing cars. The 21-inch center-locking wheels are designed to look like old Fuchs and the side mirrors look like they have been picked straight out of the 365 Speedster.

The 911 Speedster Concept shares the chassis with the current 911 GT3. It even has the same 500-hp, 4.0-liter naturally aspirated flat-six engine and six-speed manual gearbox. Officially a concept for now, the Speedster is expected to go into production as a final encore for the current 991-generation 911 before a new 992-generation model arrives in 2019.