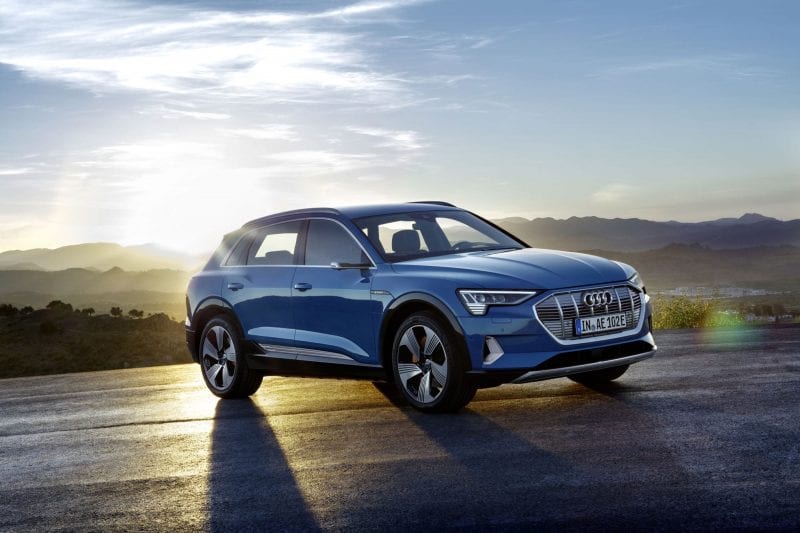 The Audi E-Tron pure electric SUV got its long-awaited unveiling Monday in San Francisco. Starting at $74,800, the E-Tron is clearly aimed at the Tesla Model X (starting at $79,500). First teased in 2016, the E-tron is also Audi’s first tangible response to the push from parent company Volkswagen Group to electrify its entire lineup of cars by 2030. The E-Tron is powered by a pair of electric motors, the company says the E-Tron will be able to accelerate to 60 miles per hour in 5.5 seconds, which is respectably quick for a midsize SUV, and will hit a top speed of 124 mph, a 95-kWh battery, good for over 200 miles. The battery supports up to 150kW DC fast charging and will charge from zero to 80 percent in 30 minutes. Owners will get 1,000kW of free charging over four years from Electrify America (a subsidiary of Volkswagen America the parent company of Audi) network of charging stations which will include nearly 500 locations across the country by July 2019.

The E-Tron looks clearly like an Audi SUV. It even has Audi’s famous trapezoidal grill, a key branding feature, despite not needing a radiator. The grill allows air to pass through under the battery to provide some additional cooling. Audi says the e-tron can comfortably seat five adults in a spacious cabin loaded with tech. It comes standard with air suspension, 20-inch wheels, LED lighting, seats with built-in heating and cooling, panoramic sunroof, inductive wireless smartphone charging, and more.

Topping out the range is the Audi e-tron SUV First Edition. Starting at $86,700, it includes the same features as the Premium Plus and Prestige but adds bespoke 21-inch wheels, Dynamic bright orange paint brake calipers, wooden inlays throughout the cabin, black leather interior, and Night Vision Assistant in the dash. Just 999 units of the First Edition will be sold in the United States.