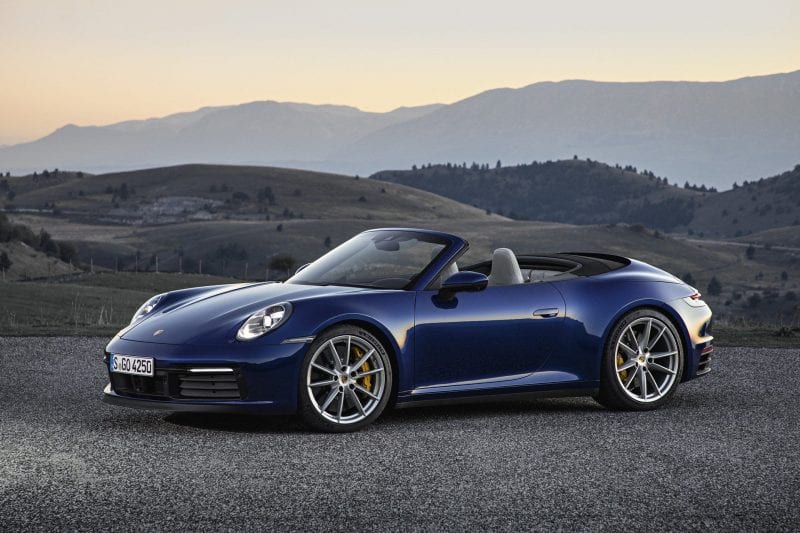 Today, Porsche took the top off the eighth-generation 911 cabriolet and is absolutely gorgeous. Like its recently unveiled 992-generation coupe sibling, the stunningly beautiful car is being shown first in S and 4S spec. The mechanical bits from the coupe have been carried over unchanged, as was expected, into the Cabriolet. Both cars feature automatic fabric top, that opens or closes in approximately 12 seconds at speeds of up to 31 miles per hour, the wider body, the flat-six turbocharged engines, that make 443 horsepower and 390 lb-ft of torque, and it’s paired to a new eight-speed dual-clutch gearbox, re-designed PASM dampers, optional Adaptive 18-way Sport Seats Plus with improved lateral support, and extended digital features. The interior’s been revised, too, and it’s all quite snazzy.

The Carrera S Cab when equipped with Sport Chrono will sprint from 0-60 in 3.5 seconds, and the Carrera 4S Cab will do the same in 3.4 seconds. That’s a 6 tenths of a second quicker than the cars they respectively replace. The top fabric roof has a glass rear window can now open and close in 12 seconds at speeds of up to 31 mph, which is much quicker than the 30 seconds it took the previous 911. Porsche will include an electrically operated wind deflector, too, since you’re not really going to use those back seats.