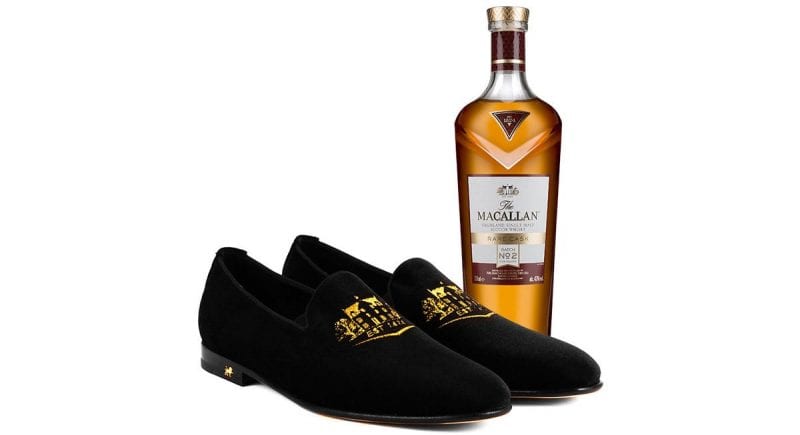 Shoemaker Rob McAllan has partnered with The Macallan to release a limited edition series of men’s loafers in the US, “inspired” by the Scotch whisky brand’s ‘Rare Cask’ expression (there are only 100 pairs).

The limited-edition style has been created by the New York–based brand in partnership with the Macallan. Meant to honor the distiller’s Rare Cask series, the black velvet loafer features the silhouette of the historic Easter Elchies house logo stitched in gold. As with most Rob McAllan shoes, you’ll find the tiniest metal lion embellishment on the side of each heel. Each pair costs US$500. This is not the first time a whisky brand has tried its hand at fancy footwear. Back in 2015 Johnnie Walker partnered with Oliver Sweeney to create a pair of Oxford brogues that could conceal a miniature bottle in each heel. Talisker likewise partnered with Oliver Sweeney on a pair of hiking boots, the left shoe having a small pouch to hold a 2oz flask.

All proceeds from the sale of the loafers are being donated to the Folded Flag Foundation, a non-profit dedicated to providing educational scholarships to the spouses and children of the U.S. military members who died in action.   Discover Opulent Club on Apple News.