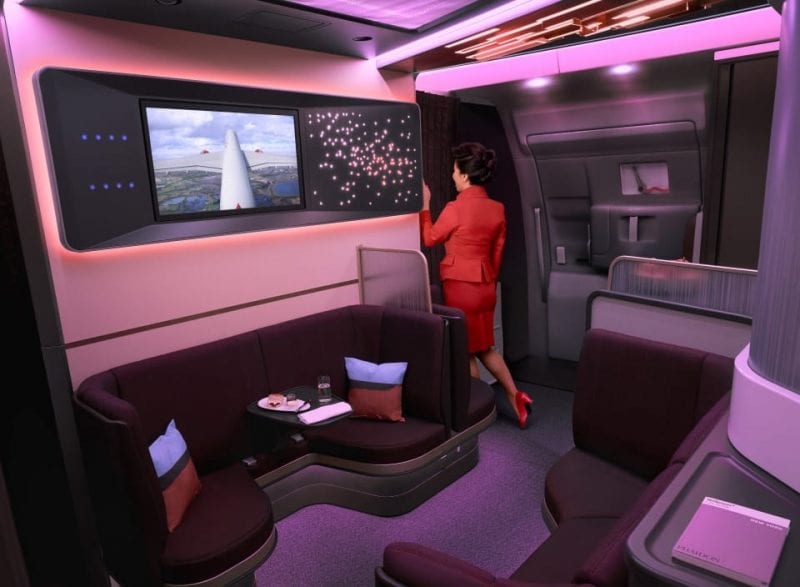 Virgin Atlantic Reveals New Design For Its Airbus A350-1000 Fleet

British airlines Virgin Atlantic has revealed a first look inside its plush new First Class cabin on the Airbus A350, and its cabin interiors, which will be first seen this summer on the airline’s London to New York route.

A bar has been replaced by a plush social area with a huge movie screen, known as The Loft, as part of the innovative and stylish designs on Airbus A350-1000. There are huge changes to the seats across the board and the first flight will be debuting later this year. The biggest change is in the Upper Class cabin, where the seats have been completely redesigned.

The new cabin layout sees the seats, dubbed suites, laid out in a 1-2-1 configuration. Every one of the suites are window facing, and have screens that can be adjusted to offer more privacy. The new entertainment system features Virgin’s biggest ever screen, at 18.5 inches, and there’s a handy USB port and power outlet as standard.

Meanwhile, it’s not just Upper Class passengers who will see the benefits. Economy seats will be upgraded with new fabrics and adjustable headrests, as well as a larger screen exceeding 11in. The 235 economy seats on the A350 are in a 3-3-3 configuration, plus USB ports, power sockets. The front four rows of Economy will have greater legroom, that’s a 34in pitch, more than rivals like British Airways. The new cabin design is fun, exotic demeanor, and the company may be on to something big.