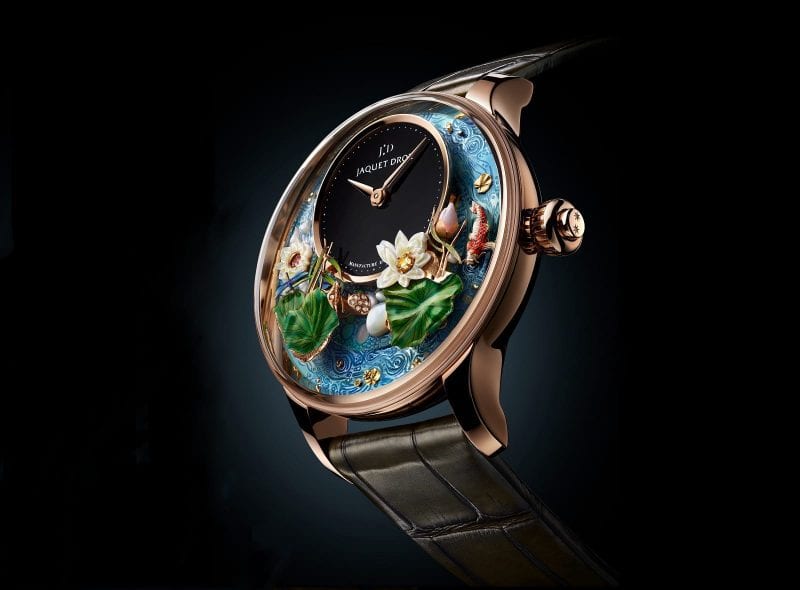 The new Magic Lotus Automaton is an animated Zen garden. Fauna and flora come to life in breathtaking detail in this luxurious showcase of artisanal techniques. Inspired by the concept of the circle of life, the dial depicts a gently flowing lake that circles the dial with representations of the seasons, a symbol of the stages of life.

The lotus is part of the animation of this automaton. The white lotus flower floating in the water has as its heart as precious stone, which thanks to an ingenious system changes each time it goes under a leaf or the dial. For every full rotation it changes the stone four-times, alternating between yellow sapphire, blue sapphire and ruby.  A mother-of-pearl button at 3 o’clock symbolizes the unopened Lotus bud. In relief upon a corolla of gold petals, it evokes the first season: spring. To its left, a Lotus flower in full bloom is the symbol for summer.

The white lotus flower is not the only thing that moves on this automaton. A hand carved lake Koi is also present on the dial, and its motion is very similar to the real animal. In this lake a koi carp swims with its tail swishing back and forth. Its movement is one of the more obvious automaton on the Magic Lotus. Not only does the koi’s tail move from side to side, the koi itself dips below the “surface” of the water to pass under the lotus leaves. The best way to observe this is to view the dial from its sides.

Mother-of-pearl petals surround an unprecedented movement at the heart of the Lotus: each time it passes beneath the dial or leaves, it acquires a new stone alternately blue sapphire, yellow sapphire and ruby.

The rest of the watch is simply exquisite, with Jaquet Droz’s “ateliers d’art” department have applied its intricate arts to the dial. Jaquet Droz estimates 210 hours is needed to decorate the dial. The Magic Lotus Automaton is powered by the cal. 2653 AT2. The movement is powered by two barrels, one for the automaton, and the other for the timekeeping with a power reserve of 68 hours.

Like its predecessors, the Magic Lotus combines miniature art, micro-engineering and story-telling to brilliant effect, amalgamating all of Jaquet Droz’s strongest suits inside a 43mm case and is easily one of the talking pieces of 2019.

The Jaquet Droz Magic Lotus Automaton is limited to just 28 pieces each in 18k white gold and rose gold. Both are priced at $243,000. Discover Opulent Club on Apple News.