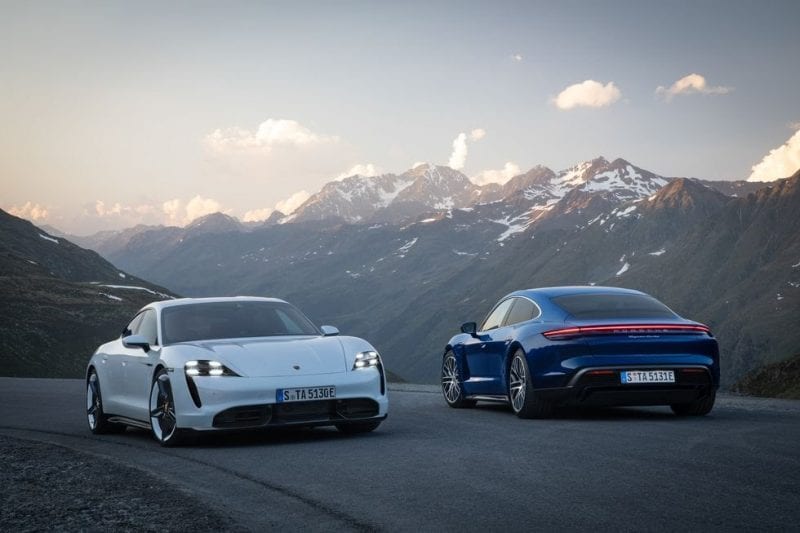 Porsche has finally unveiled its first all-electric car.  The 2020 Porsche Taycan electric performance sedan, delivering on just about every promise of the stunning Mission E concept car.  Taycan will begin its production life as two variants: the Taycan Turbo and the Taycan Turbo S, which run a staggering $150,900 and $185,000, respectively.

The Taycan will initially be offered in 750-horsepower Turbo S and 670-horsepower Turbo versions, both of which use a 93.0-kWh battery pack and an electric motor mounted in both the front and rear axles. Those powerplants can propel the turbo s variant from zero to 60 in as little as 2.6 seconds putting it nearly on par with the Tesla Model S P100D. The Turbo trim level will hit 60 in 3.0 seconds. Top speed for both is restricted to 161 mph, but exactly how far you can drive them at that or any speed is yet to be determined.

If you charge the Taycan at one of Porsche’s new 350-kilowatt DC fast charging stations, its high maximum charging power of 270 kilowatts means that the battery can go from a 5 percent charge to an 80 percent charge in just over 22 minutes. The Taycan is the first electric car with two charge ports, one on each front flank. The Porsche Taycan has not been issued with an official EPA rating yet, though the Turbo S has been given a 388–412 km (241-256 miles) range per charge under the WLTP standard.

In addition to a new design and powerplant, Taycan is also add a new Porsche infotainment system that trims distraction and introduces a new voice assistant feature. With “Hey Porsche,” drivers will be able to control many aspects of the cars secondary controls like media, climate and navigation.

Visually, the exterior’s hunkered down stance, low-sloping front end, pronounced fenders, flush door handles and continuous rear light strip. Four-point LED daytime running lights are also part of the package. The Taycan’s body is built from a mixture of steel and aluminum joined together with a variety of different welding processes, screws, rivets and adhesives.

Go inside, the 911-inspired cabin is simply designed, with a 16.8-inch, four-mode, digital instrument cluster occupying the highest point of the dash. Taycan will be the first car that can run Apple Music without a connected smartphone and will accommodate over-the-air updates. Cabin trim offerings will include standard leathers and woods, but also include sustainable options such as naturally tanned leather.