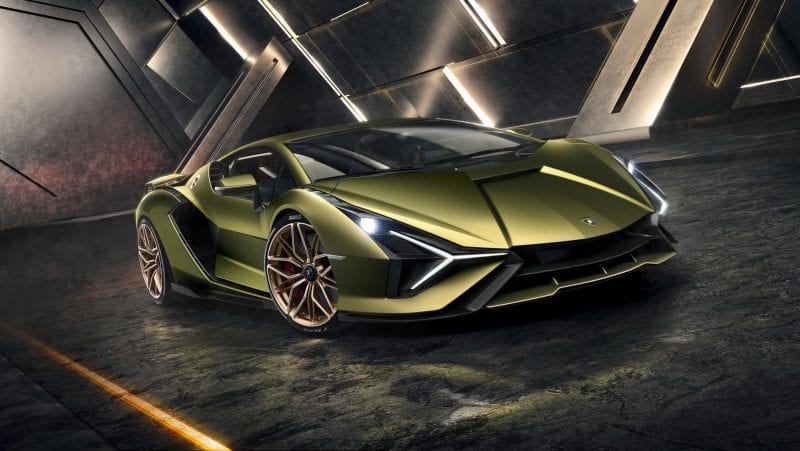 Lamborghini has revealed the new Sián in its entirety as the company’s first hybrid and most powerful supercar to date. Set to make its public debut at the 2019 Frankfurt Auto Show later this month.

The hybrid hypercar is essentially an ultra-modified version of the outgoing flagship Aventador. The company considers the car the “first step in Lamborghini’s route to electrification” and has outfitted its with a 785hp V12 engine with titanium intake valves. An electric motor sandwiched between the engine and the transmission receives electricity from a supercapacitor the first to be used in a hybridpowertrain and injects 34 horsepower into the driveline. Combining to produce 819 hp. The car is capable of going from 0 to 62 in just 2.8 seconds, a record for the automaker. It can also sprint from 20 mph to 40 mph and 45 mph to 75 mph quicker than the company’s extremely powerful Aventador SVJ.

The Lamborghini Sián also boasts a regenerative braking system, which has been developed in-house by Lamborghini, takes advantage of the supercapacitor’s symmetric behavior and fully charges it every time the supercar brakes.

Visually, the Sián taking futuristic design cues from the Lamborghini Countach in its sharp, sculptured shape, the Sián model boasts an “uncluttered” form, but introduces new features such as its characteristic aero wings. The wide, Y-shaped LED daytime running lights come straight from the Terzo Millennio introduced in 2017, while the six hexagonal rear lights are a nod in the direction of the Countach released in 1974.

A limited series of just 63 models of the Lamborghini Sián are being produced, in honour of the company’s founding year, 1963. All the cars are already sold out, with Lamborghini saying that each one will be individually styled according to the owner’s tastes through the Ad Personam programme. Discover Opulent Club on Apple News.