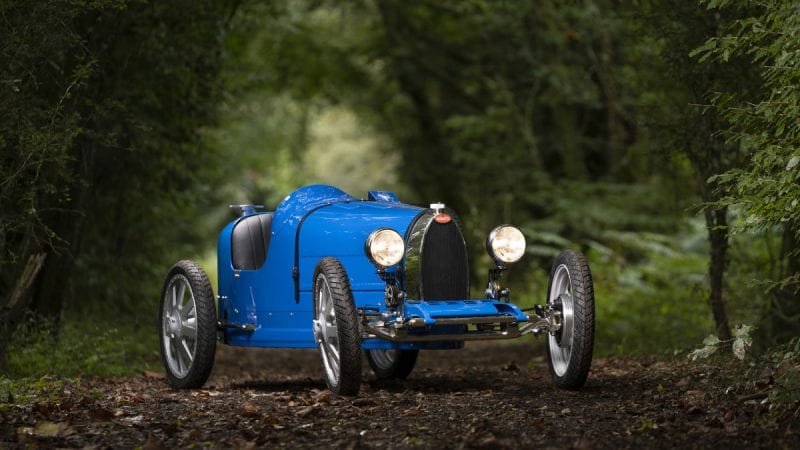 The Bugatti for children has arrived! To celebrate its 110th anniversary, Bugatti has unveiled the first Bugatti Baby II prototype. Dubbed “XP1”, this prototype is the result of a collaboration between Bugatti and The Little Car Company.

The Bugatti Baby II proved popular enough, following its announcement, that Bugatti sold its entire 500 production run in just three weeks. Based on the iconic 1924 Type 35 Lyon Grand Prix car.  Bugatti Baby II combines the style of the original Baby and the 21st century technology. To allow the Baby II to be driven by both adults and children, it has grown from the 50% scale of the original to a 75% scale replica of the Type 35, and includes a sliding pedal box for drivers young and old.

In building the Baby II, Bugatti tried to replicate as much as it possibly could to bring the Type 35’s essence back to life.  It gets a rear-wheel-drive layout and a battery-powered electric powertrain. Bugatti Baby II gets two selectable power modes: a 1kW ‘child mode’ with the top speed limited to 20 km/h, and a 4kW ‘adult mode’ with the top speed limited to 45 km/h.  A hollow front axle, eight-spoke wheels. The cockpit features the classic four spoke steering wheel, a turned aluminium dash with custom Bugatti instruments, a speedometer, battery level indicator and power gauge.

The Baby Bugatti II is painted in French Racing Blue with a black interior, though custom colors are available.  The base Baby II will be crafted with a composite body, the Baby II Vitesse will have a carbon fiber body, and the Baby II Pur Sang will have a hand-built aluminum body.