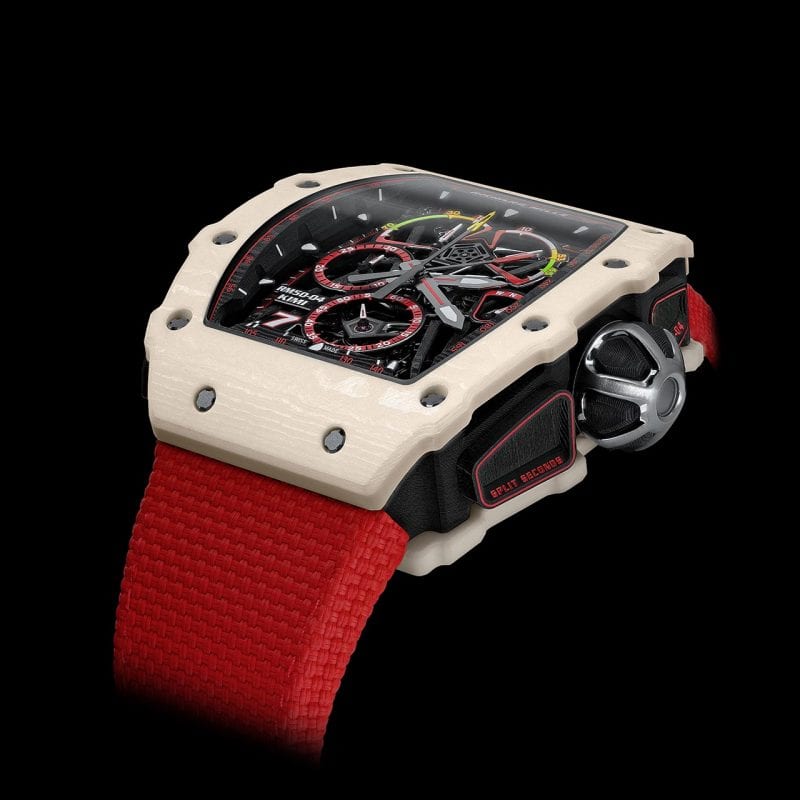 The Singapore Formula 1 Grand Prix is the perfect occasion for Richard Mille to present the RM 50-04 Tourbillon Split-Seconds Chronograph Kimi Räikkönen alongside its partner. With this new exclusive timepiece, the Swiss brand  pays homage to both the driver, a F1 World Champion, and his current team, the Alfa Romeo Racing Team.

Richard Mille has supported Alfa Romeo Racing Team since 2018, so Kimi first entered the Richard Mille world when he was signed by the Swiss manufacturer in 2018.  Kimi Räikkönen has had an amazing two decades in motorsport has seen him on 103 podium finishes.

The new RM 50-04 is fitted with a split-seconds chronograph tourbillon and a grade-5 titanium and Carbon TPT movement that weighs just 7 grams thanks to its fine skeletonisation. To combine these complications within a single mechanism required perfect transmission of energy to ensure faultless operation. The need to reduce friction led the research team to improve the profile of the teeth on the barrel and the second wheel pinion. The latter led to an excellent distribution of torque and an optimized output. The combination of the tourbillon escapement and the chronograph paired with the unprecedented fine skeletonization make this particularly innovative watch the absolute chronograph perfection.

This high-tech calibre is equipped with the latest-generation split-seconds mechanism developed by the Richard Mille engineers. The colours of the Alfa Romeo C38 single-seater car are also showcased on the bezel and case back in white Quartz TPT. This is achieved by inter-laying 600 layers of silicon each 45 microns thick and impregnating them with a white matrix before heating them to 120 °C in an autoclave.  This process gives the material a very high resistance/weight ratio, non-allergenic properties, and resistance to UV rays.

Flashes of red are visible within the movement, particularly on the Carbon TPT flange, the chronograph counters, and the power-reserve, torque and function indicators. The grade-5 titanium dial also includes the number 7, which is worn by Räikkönen while competing on track. The 70-hour power reserve indicator at 11 o’clock is visually balanced by the torque indicator at 2 o’clock which supplies information about the mainspring’s tension, permitting an optimisation of the movement’s chronometric functioning.

Richard Mille will craft only 30 pieces of the RM 50-04 Tourbillon Split-Seconds Chronograph Kimi Räikkönen, which are available through their boutiques’ worldwide. This highly complicated and technically very advanced watch will cost $1,063,000. Discover Opulent Club on Apple News.