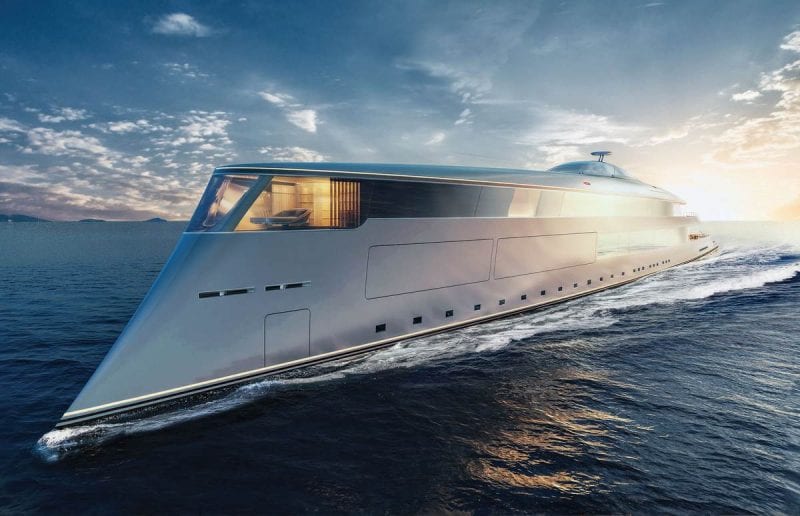 Sinot Yacht Architecture and Design has revealed a 112 metre hydrogen-electric yacht concept Aqua ahead of the Monaco Yacht Show next week. Aqua is developed for the forward-thinking owner with a futuristic design that is matched by a fully-operational liquid hydrogen and fuel cell technology power system, putting it on the cutting edge of what is possible at sea today.

According to the design studio, Aqua’s exterior lines are inspired by ocean swells. The curvaceous exterior lines flow from the stern across a 360-degree viewing capsule and wheelhouse and gather at the bow area where a spectacular Aqua room gives guests views never before experienced at sea in ultimate luxury.

The interior has been designed around providing as much privacy and space as possible.  The private owner’s area comes with a large bathroom, dressing room and private spa section. A naturally-lit VIP suite located at the waterline near the stern is decorated in a detailed minimalist Japanese beach style that matches the interior throughout Aqua.  Accommodation is for a total of 14 people and 31 crew.

Powered by hydrogen, Aqua’s naval architecture and engineering aspects were developed by Lateral Naval Architects, has large hydrogen capacity (two 28-ton tanks) for an operating range of 3,750 nautical miles at 17 knots. The proton exchange membrane (PEM) fuel cells generating power of four MW to support the hotel functions and the electric engines (one MW each) with contra-rotating propellers and Voith Schneider propellers. The hydrogen is stored at -253° Celsius.

Sinot will present a three metre scale model of the concept at the Monaco Yacht Show next week. Discover Opulent Club on Apple News.