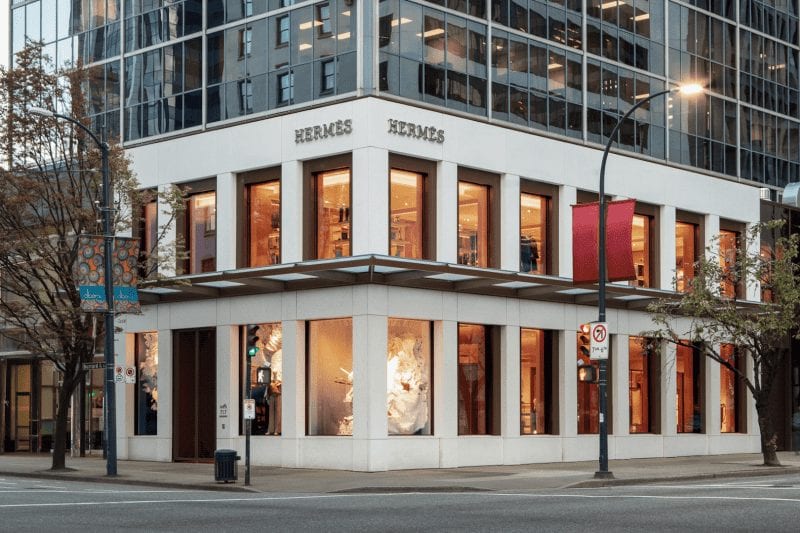 French luxury brand Hermès opened an impressive flagship store in downtown Vancouver on Friday of last week. The new store embed elements inspired by local culture and nature. On the Canadian West Coast, cues have been taken from the city’s skyline and mountains, and this translates into a moulded concrete white terrazzo façade asserts its height and resonates with a certain mineral quality.

The new store, designed by Paris-based architectural firm RDAI, features a contemporary design that is consistent with the retailer’s latest store concepts, with company executives describing this as “Hermès at its best.”

“Twenty-four years ago, we opened our first Hermès Vancouver store and we’ve been proud to be a part of this community ever since,” Jennifer Carter, the president and chief executive officer of Hermès Canada, says. “Vancouver is a spectacular city that shares many values with Hermès: from a relentless pursuit of innovation to a love of beautiful objects made for living and an appreciation of craftsmanship — above all else.”

The leather goods area faces the staircase, and flows into the equestrian collection, while the men’s universe has been given ample room towards the back. A staircase of wood and glass, adorned with a flying Pegasus by sculptor Christian Renonciat, leads to the upper floor where the homeware, tableware and wallpaper collections are presented, in addition to women’s apparel, accessories and shoes, and a private salon.

The store caters to uber-wealthly clients with special orders via its ‘Horizons’ division which has outfitted private jets and luxury cars. And next year, an area for makeup will be coming to the new Burrard Street store, according to the company.  Discover Opulent Club on Apple News.