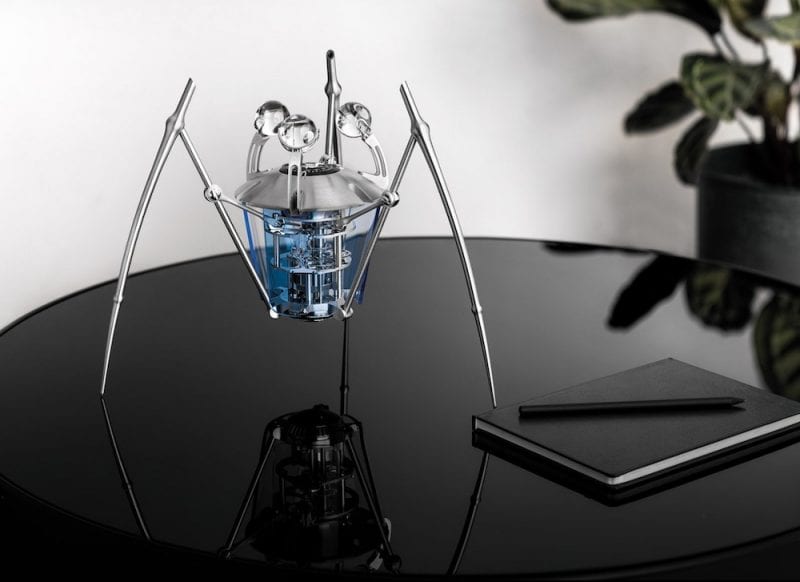 Six years after the launch of the Starfleet Machine, the first clock co-created by MB&F and L’Epée 1839. Both company enjoy working together so much that they have just released their thirteenth joint clock. Tripod is the second clock in a planned series of three that began in 2019 with the T-Rex.

It comprises a minimalist clock face suspended between three delicate insect-like legs.  TriPod tells the time in hours and minutes but not in the usual way. The dial is designed to be read from any angle or direction by indicating the hours and minutes three times; the concentric dials show 36 hours. But this clock requires some interaction between Man and Machine: the observer reads the time thanks to three optical spheres, each magnifying the clock’s numerals and making them legible. To let all three of the “insect eyes” show the time from any angle, the dial features three sets of numerals 1-12, meaning that the dial completes a full rotation in 36 hours instead of the customary 12 hours. The time is visible through one of the magnifying lenses at any time.

Underneath the dial is a 182-component three-dimensional sculptural movement crafted on three levels by L’Épée 1839 with a vertical balance beating at a traditional 2.5Hz. Time-setting and winding are by key, and when fully wound the movement offers a generous eight-day power reserve.