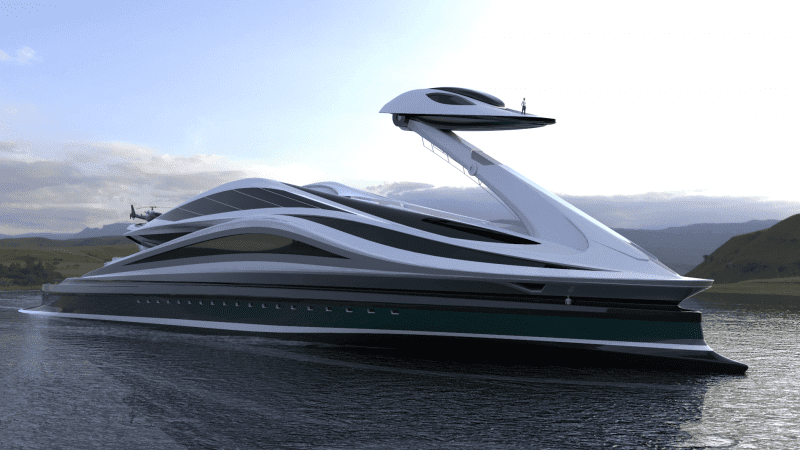 Italian designer Lazzarini has unveiled his latest avant-garde superyacht concept Avanguardia, named after its English meaning of ‘vanguard’. With the inspiration for the ‘head’ stemming from a 1970s Japanese manga, the swan ‘head’ functions as a control tower to maneuver the 137-metre long yacht.

The control tower, which is used to operate the yacht, is moved by an extendable crane. This isn’t just for aesthetics, as the control tower can be lowered down to water level and detach from the main vessel, transforming into an auxiliary 16-metre boat, while a second control point aboard Avanguardia keeps her in motion. Like other Lazzarini creations, Avanguardia is also modular, and the owner can pair it with Lazzarini-made jet capsules.

Spread across five decks, Avanguardia can transport a total of 60 passengers and provide accommodate for 24 guests, 10 crew and 12 staff. Include two helipads each with a hangar, a swimming pool, Jacuzzi and an abundance of sunbathing and social areas for guests while cruising.

The rear deck of the Avanguardia concept incorporates a personal port for two jet capsules which can be attached to the structure of the vessel to become an auxiliary source of propulsion. Propulsion comes from twin fully electric side engines and a central MTU Rolls-Royce Jet engine which would enable the yacht to reach a maximum cruising speed of 18 knots.

Currently still a concept, Lazzarini estimates the concept would take an investment of around $500,000,000 to build. Discover Opulent Club on Apple News.