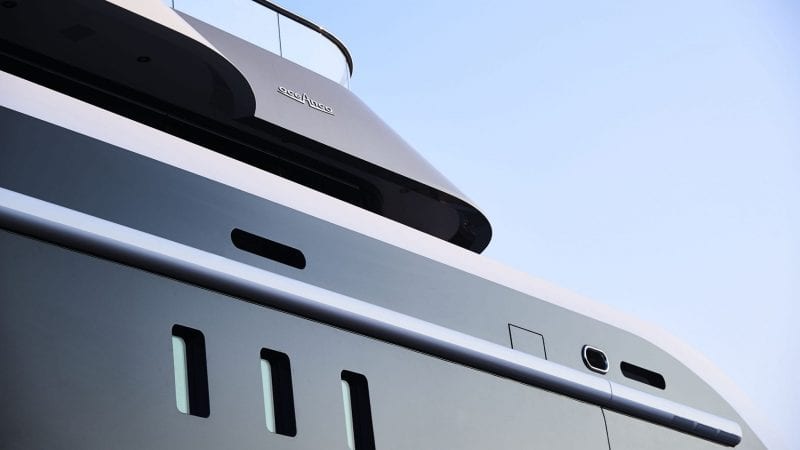 The 90-meter Oceanco superyacht, referred to as Project Shark has launched by the Dutch shipyar. Designer Luiz De Basto actually conceived of the exterior as a huge, curved, and very elegant shark that would give the superyacht its inimitable look. Built from a steel hull and aluminium superstructure to Lloyd’s standards, this four-deck displacement yacht features interiors by Nuvolari Lenard.

Oceanco, responsible for some of the most stunning custom yachts on the water, will set new design standards with Project Shark if the initial photos are anything to go by. Due for completion before the end of the year, Project Shark will join the ranks of the world’s top 200 largest superyachts.

Key features include a helipad, two elevators one for guests and one for its crew of 31, a diving center, hammam and sauna. Stretching across a beam of 14.2 meters, There are no exterior walkways above the main deck so the owners won’t have anyone looking in the windows of their private areas. De Basto also defined Project Shark with huge stretches of glass for uninterrupted oceanscapes. “The floor-to-ceiling windows give exceptional views, but you also get the boat’s unique sense of solitude through the private balconies and terraces,” says De Basto. “It’s that combination that makes this yacht so different.”

Another big project at Oceanco is the 109-metre Project Y718 (Project Bravo), a Nuvolari Lenard design that is planned to be delivered this year.