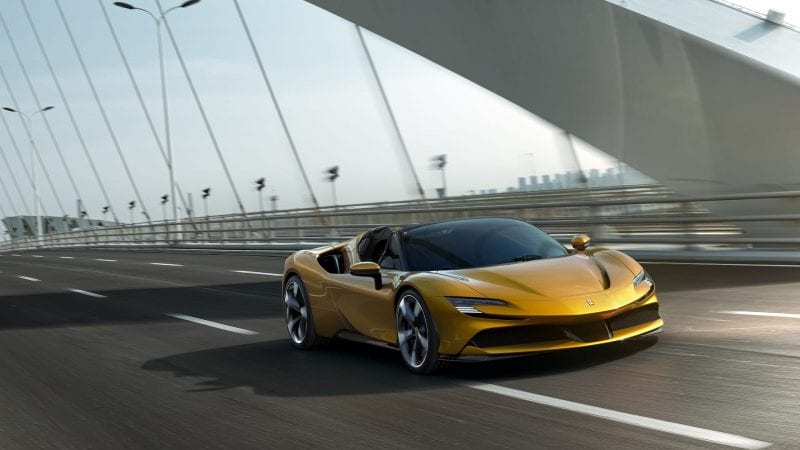 Ferrari has revealed the new SF90 Spider. As the name implies, it’s an open-roof version of the SF90 Stradale coupe introduced at the end of May in 2019.

The powertrain of the SF90 is identical to that of the Stradale, with a V8 making 769 horsepower and three electric motors filling in the rest, for a total output of 986 HP; zero-to-60 mph in about 2.5 seconds; and 124 mph comes up in less than 7.0 seconds en route to a top speed of 211 mph. Oh, and like those F1 Ferraris, it’s a hybrid.

The latest evolution of Ferrari’s retractable hardtop can be opened or closed in 14 seconds. The interior remains the same with the SF90 Stradale, meaning the same large 16-inch high-definition digital instrument cluster that’s also curved continues to steal the show, portraying a wealth of information and personalization options. There’s also a heads-up display and Ferrari’s aiding the driver are touch controls, from power-mode selection to screen navigation, easily accessed on the steering wheel spokes.

The SF90 Spider’s exterior forms are characterized by futuristic, innovative design.  The SF90 is 8mm longer, 20mm slimmer and 70mm taller than a LaFerrari. Ferrari has introduced a ‘shut-off Gurney’ flap for the spoiler. It’s a suspended wing split into two, with one part being fixed and the other movable. The movable part is designed to manage downforce, with its higher position creating less drag and its lower one creating almost whale tail-like aero drag under high-speed cornering. The front of the car is characterized by pronounced profile that underscores its extremely aggressive character.

The three air intakes in this area cool the electric motors (front) and the internal combustion engine (sides). The rear of the car is dominated by high exhaust pipes, which are the result of optimisation of the exhaust line layout. An optional Assetto Fiorano upgrade package brings Multimatic shock absorbers, a 21kg weight loss and Michelin Pilot Sport Cup 2 performance tyres. Customers can also have their SF90 Spider Assetto Fiorano finished in a two-tone livery.

The first SF90 Spiders are set to arrive in the U.S. in the fall of next year, and although pricing has yet to be confirmed, it’s fair to say that if you have to ask, you can’t afford it.  As with all other Ferraris, the company’s first hybrid with a retractable hardtop comes bundled with a seven-year maintenance plan. Discover Opulent Club on Apple News.