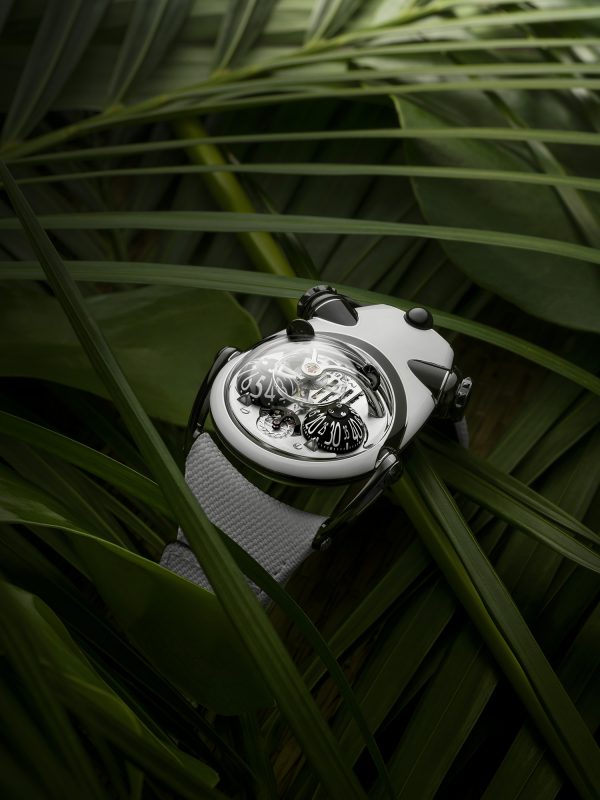 MB&F has revealed the HM10 Panda created for Only Watch, a biennial auction specializing in one-of-a-kind timepieces that will be held in Geneva on 6th November which is the hallmark of this biennial charity auction, with 99 percent of the proceeds going to support research in treating and curing Duchenne muscular dystrophy.

The MB&F HM10 Panda features a one-of-a-kind case design presented in stainless steel and titanium, with a skeletonized dial to highlight the meticulous craftsmanship of the watchmaker. At 45mm wide, 54mm from lug to lug, and 24mm thick at the highest point of its exaggerated domed sapphire crystal and case backed. Even more than the size, the HM10 Panda’s unique asymmetrical sci-fi design gives it a presence miles apart from the standard wristwatch formula.

The top section of the case is painted in black and white lacquer to mimic the coloring of one of the rarest mammals in the world. Ears were crafted from titanium, while the tail is ceramic, while the caseback and lugs are finished in black PVD-coated Grade 5 titanium. To mimic the panda’s eyes, two black aluminum time-display domes were used on the face of the watch also reffering to the other use of the word ‘panda’ in the watchmaking world, where white watch dials with black counters are called panda dials. The teeth act as the power reserve indicator. Attached at the ‘hands’ and ‘feet’ is a contrasting white nylon/leather strap, giving the ultra-exclusive luxury timepiece a comfort aspect like no other.

The sole example of the MB&F HM10 Panda offered together with unique works of art by multidisciplinary designer Lee Yuen-Rapati, who has created a series of illustrations inspired by the timepiece especially for the auction at Only Watch 2021 in Geneva on November 6, 2021. Discover Opulent Club on Apple News.