SINGAPORE AIRLINES UNVEILED NEW SUITES FOR ITS AIRBUS A380

In the battle to fill their seats with high fliers, the world’s top airlines are rolling out evermore luxurious options for top-tier travelers. Singapore Airlines will debut their hotly anticipated new Suites on the Singapore-Sydney route in December. After four years in development, the airline has made improvements across the board with changes in Business Class, Premium Economy Class and Economy Class; but it is definitely the addition of the plush new Suites that promises to be a game changer.

The Singapore Airlines Suites wardrobes, luxury bedding and bathrooms are blurring the lines between flying and the five-star hotel experience for passengers occupying suites. Promise a personal oasis complete with lavish furnishing and finishes including a separate full-flat bed with adjustable recline and plush leather chair. The leather upholstered seats are adjustable using an electronic control side panel while the swivel capability of the chair as well as its capacity for 45 degree reclining allows for flexibility. 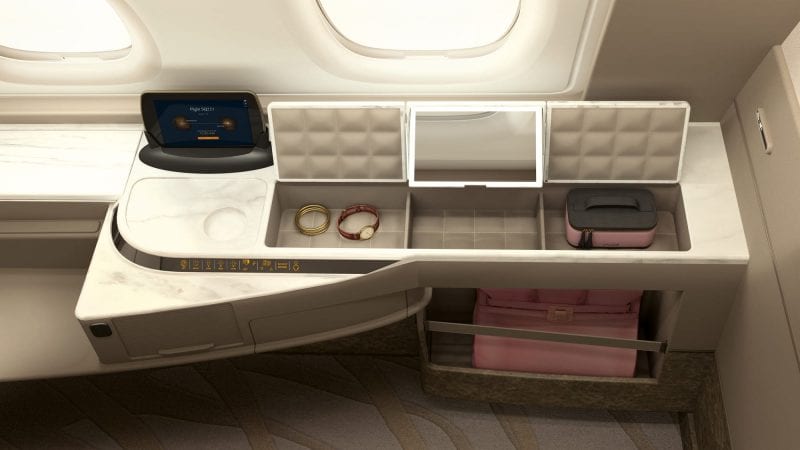 With the number of suites pruned to six from 12 for the most premier of customers, there’s space to fit in an actual flat bed, alongside a separate seat with leather upholstery by Italy’s Poltrona Frau. Suites are outfitted with a 32-inch full HD monitor, customized handbag stowage compartment, amenity box lined with soft leather, specially designed carpet and a feature wall with mood lighting. Two lavatories are available for suites one of which actually has a sit down vanity counter. Unlike on rival carrier Etihad Airways PJSC, there won’t be a shower though.

Singapore Airlines will begin flying its new first class suites daily on the Airbus A380 from December 18 2017. U.S. travelers have limited options to fly the A380. Singapore uses the jet only for flights from New York JFK that fly to Frankfurt before continuing on to Singapore. But, from its hub there, Singapore uses its A380s on routes to Beijing; Frankfurt; Hong Kong; London Heathrow; Melbourne, Australia; Mumbai; New Delhi; Osaka; Paris Charles de Gaulle; Shanghai and Zurich.