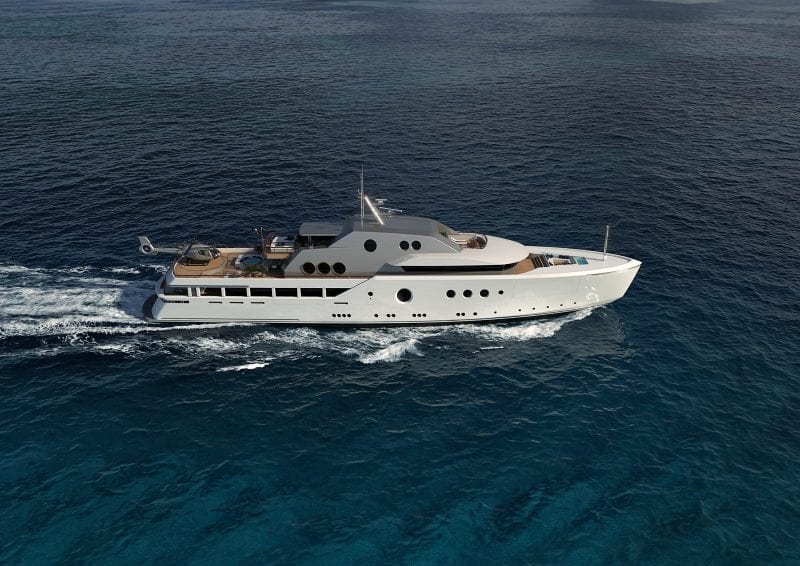 Italian designer Luca Vallebona has revealed a new 62m motoryacht concept called Broadway, inspired by the streets of New York specifically Midtown Manhattan, and would be built with a steel hull and aluminium superstructure. This new concept comes hot on the heels of Vallebona’s 82 metre Pentagramma design, which was released in May 2018, while Vallebona was also responsible for the design of 42.4 metre MondomarineSerenity.

“I took more of an American approach to this design than a European one,” explains Luca Valle one. “I wanted to create something that was ready to go anywhere and could go on long trips, something stylish but also practical. For example, the foredeck and aft platforms don’t have a teak finish, which means you have less maintenance and fewer delicate pieces to worry about on board.” 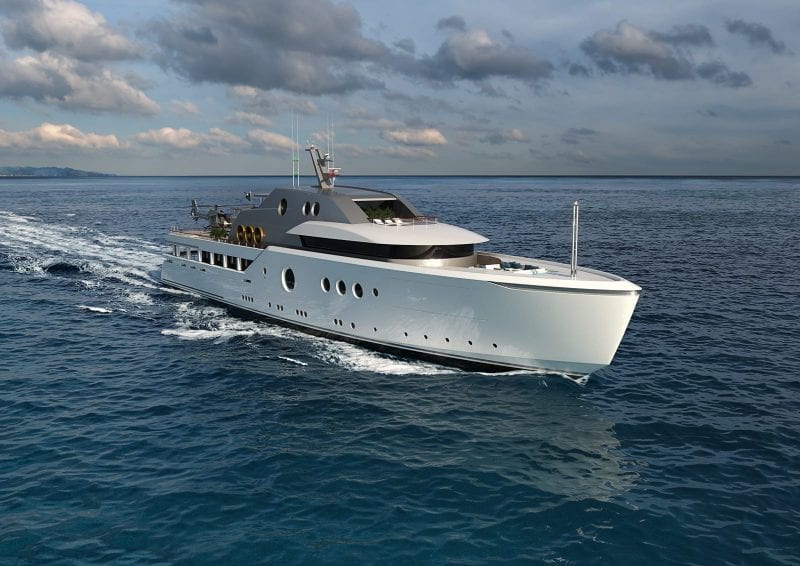 Displacing around 1,100GT, the yacht’s exterior is characterised by elements recalling a golden age of discovery with brass-framed porthole windows and pillars above the main deck bulwarks. The round porthole windows are a nod to naval history with three of the windows on the superstructure highlighted by the incorporation of brass frames. The use of grey on the superstructure helps to highlight this detail and provides a good contrast to the white hull – an approach we’ve seen before that works well. “Another important goal was to create a clear exterior made up of two elements – a hull and a massive volume above it,” explains Vallebona. “I did a similar thing with the 82m Pentagramma, however, with that project it was a glass superstructure but the thinking was the same, which was to be clean and clear and to avoid creating terraces above terraces above terraces.”

Much emphasis has been put on outdoor living on board Broadway, with a spa pool and seating area with fire pit forward on the bow and numerous terraces – including a private owner’s terrace on the bridge deck. The concept also includes a large beach club aft and an upper deck pool with sunpads and a helipad which can be transformed into an additional sunbathing area or dance floor.

The observation deck sits above the owner’s and features outdoor seating forward and aft of this level and includes another lounge and generous bar. A circular lift extends from this deck and down to the lower deck via the main deck. Forward of the latter is the tender garage which can house a 7.5m and a six-metre tender, along with a host of other water toys such as Jet Skis. Aft of this is the galley, crew mess and a workshop, making it straightforward for the crew to service both the tender garage and dining room, which is directly connected to the galley. 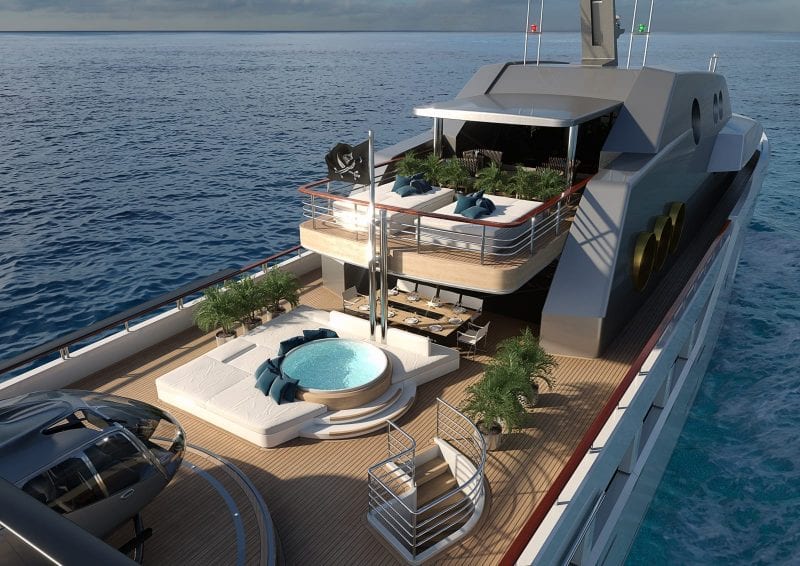 Inside a double-height main saloon can be accessed directly from the lower deck gym/diving area and beach club via a staircase. Large sliding windows on either side of the saloon offer access to folding balconies that each feature two catamaran-style hammocks which, Vallebona says, serves to decrease the formality usually felt in this area. The main saloon would also house a bar and dining area can seat 12 guests and the room can be extended thanks to bi-folding walls that separate it from another bar area. The main saloon is aft of this deck with direct access provided to the stern via a staircase to the lower deck leading to an enclosed seating area. Accommodation for 12 guests includes an amidships owner’s suite on the bridge deck.

At this stage little is known about the technical spaces on board Broadway, however the designer has revealed that the explorer will achieve a cruising speed of 12 knots and a top speed of approximately 15 – 16 knots.