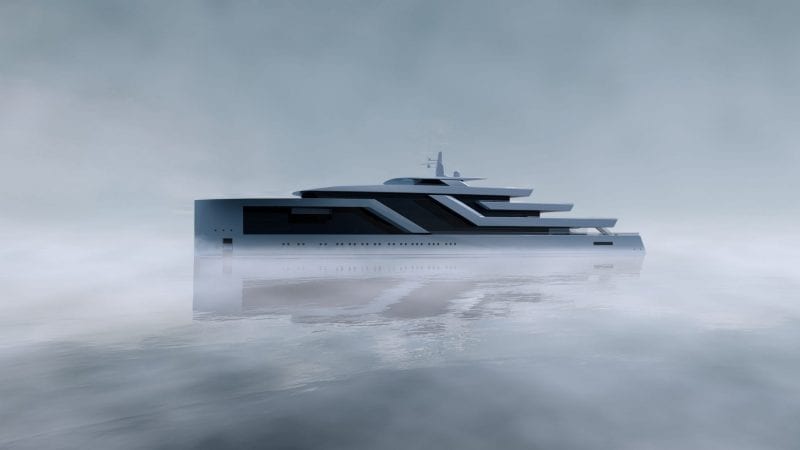 Isaac Burrough Design studio has unveiled a new 100m superyacht concept with large, bold surfaces, and sweeping curves. This unique combination creates a design that is not only massive in size but also in character, giving it a strong and outspoken presence.

“During my career, I have worked on a lot of builds with really complex exterior surfacing, which is often really stunning, but for this design I thought it would be interesting to step away from that and try experimenting with larger, bolder surfaces.” – Isaac Burrough The new 100m superyacht concept features a striking exterior profile that has been developed to draw in as much natural light as possible. Early on in the process, Burrough explains that in order to create the bold stance of the vessel, he needed to raise the bow a full deck higher than it originally was. This also allows the owner’s cabin to be extended further forward, giving an extra-large cabin that incorporates a private lounge, office, yoga studio, double ensuites and dressing areas, plus two outdoor balconies off the bedroom.

Seven other staterooms would accommodate the remaining 14 guests while the crew quarters would accommodate a staff of 32. Other key features include a gas fire pit aft, large beach club, dedicated spa area, cinema and touch and go helideck. A 10 metre pool and two circular Jacuzzis, meanwhile, would be made completely of glass and accompany a 215 square metre beach club.

Al fresco entertainment areas are plentiful and feature a sun deck measuring 33 metres, equipped with a barbeque, bar and couches capable of seating 24 to create the perfect ambience for guests to relax, socialise, and enjoy the view.