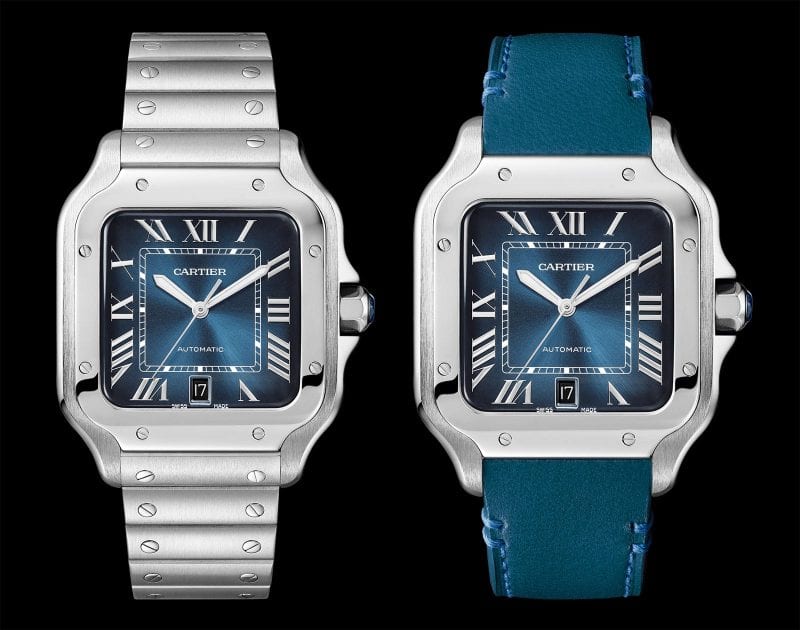 In 2018, exactly 40 years after the introduction of the Les Must de Cartier Santos, the jeweller gave the Santos a major facelift. Cartier’s vision of the luxury sports watch now in a cool gradient blue edition, new model characterized by a metallic blue dégradé dial which adds to the classic silver dial with black markings. The watch will be showcased at the upcoming Salon International de la Haute Horlogerie 14-17 January.

The Santos de Cartier watch was lauded for its updated features like the QuickSwitch interchangeability system and SmartLink resizing mechanism for the steel bracelet, and the same can be found in this all-new version that’s available in a single size, the Large, which comes with a case width of 39.8 mm. The Roman numerals stand out clearly against the blue background thanks to the reflective, mirrored finish nicely harmonizing with the hands. Differently from the classic models which come with blued hands, the hour and minute hands are filled with Super-Luminova for better visibility in poor light conditions. The dial is completed by a small date aperture at 6 o’clock.

Inside is the self-winding cal. 1847 MC, which is Cartier’s entry-level, in-house movement. Beating 28,800 vibrations per hour and has a 48-hour power reserve.

The Cartier Santos with gradient blue dial is priced exactly the same as the version with a silver dial: US$6850 or S$9450. It is now available at boutiques, and will arrive at retailers later in the year.