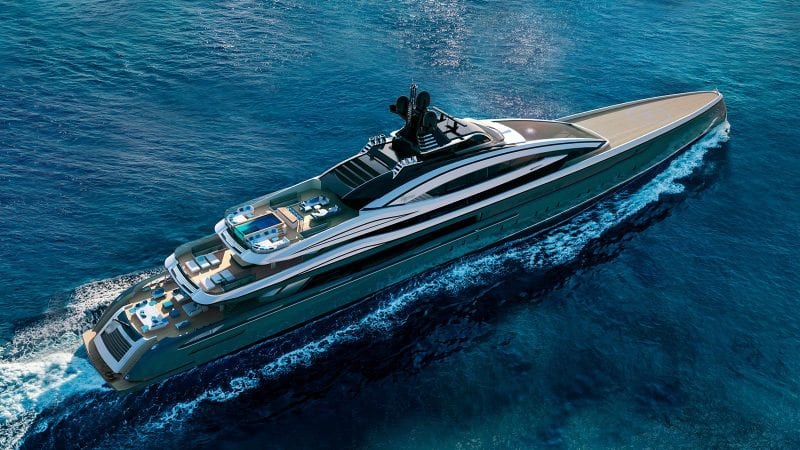 100-metre superyacht concept Crossbow revealed by Italian studio Hydro Tec at the end of 2018 as their largest concept so far, has been now taken on by Italian shipyard and part of the Palumbo Group, ISA Yachts. Crossbow will now be presented as the flagship of the ISA Yachts Sport Coupé line.

Crossbow will be built of aluminium hull and superstructure within a beam of 12,5 metres, more than a metre less than average for this size bracket and has a “fast, light and with a sleek sporty aesthetic”.  One of her key distinctive features is a draught of 3,5 meters that is very unusual for a yacht of her size. That will allow Crossbow easily reach even very shallow waters.

The studio said the exterior deck areas have been designed with “speed in mind”. Fixed furniture has been kept light and well protected from the wind. The bow meanwhile can be transformed into an entertaining and sunbathing area when the boat is at anchor.

Her huge 135-square-metre beach club is another important design feature, along with infinity pool on the upper deck, Jacuzzi, cinema. A separate  main deck gymnasium and piano lounge, and a separate owner’s deck with private Jacuzzi, cinema, lounge and study. Accommodation is for up to 16 guests within 8 doubles, while the lower deck is fitted to accommodate the staff of 32 members.

Project Crossbow has an estimated top speed of 25 knots when a pair of MTU 16V 4000 M93L engines are fitted.   This determined Crossbow’s “speed in mind” interior design with fixed furniture protected from the wind.

The studio previously revealed that it had received increased interest in the concept and demand for Crossbow inspired designs following the Monaco Yacht Show.

“After the Monaco Yacht Show this year we received even more interest to develop new designs based on the core principles of project Crossbow,” they comment.